And now we come to the Blogger’s Paradox. The Blogger’s Paradox holds that the more a band does, sometimes the less there is to write about them. As a music fan, we love it when our favorite bands play all the time. Getting to see a band you love twice a month is great. Who could complain about that?

As a blogger though, it’s hard to find a new thing to say about bands that play all the time. With touring bands, they’ve usually done a whole lot since the last time they came around, and you can talk a bit about their newest record, their European tour, etc etc. When a band plays all the time, sometimes the best you can say is ‘last week’s show raged, tonight’s probably will too.’ 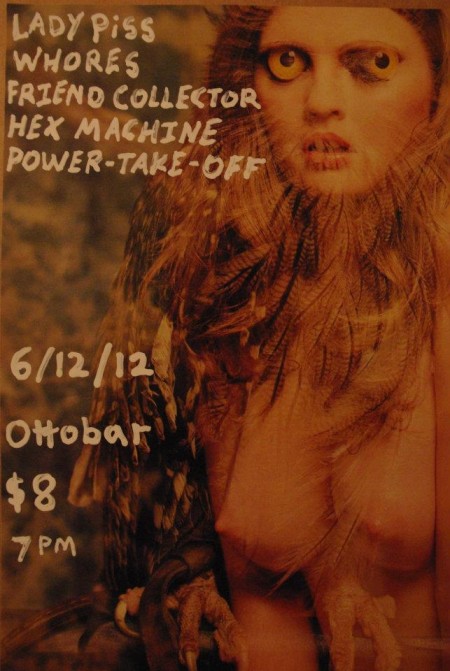 Friend Collector raged the last time we wrote about them, and they’ll probably rage tonight and next week too. They raged so hard we named a cocktail after them. What else is there to say?

There are four other bands on the bill tonight. Lady Piss, Whores, Hex Machine, and Power-Take-Off. The truth is that we don’t really know what the hell to say about any of them. They all occupy that ill-defined space of heavy music somewhere between post-hardcore and metal proper that we really like to see live. If you like to see it live too, then get your ass there tonight.

One more thing to mention about this show: It begins at the very reasonable hour of 8pm and happens to coincide with Twofer Tuesday at the upstairs bar, so the potential for epic ragery is at an all time high.