It used to be hard to discover new music. Back when underground music was, um, underground- hell, back when you could use the term ‘underground music’ without sounding like someone’s dad it took a lot to discover music that wasn’t on the radio. It usually involved knowing someone who was cooler than you were, stocking up on 6 packs of blank cassettes and scrupulously reading and cross referencing the band names being dropped in MRR and Heartattack.

Ironically, now that all the music in the world is published on the internet and can be streamed any time anywhere, it’s actually almost harder to discover new music. There’s a paralysis of choice. recommendations carry less weight and with the advent of taste algorithms any new music you do discover tends to blend together and fade into the background just as fast as you can play it. 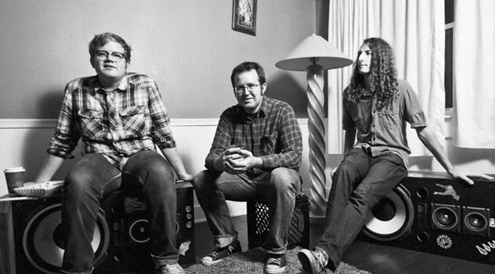 Take Cheap Girls, for example. Here’s a band that we’ve been dimly aware of for quite awhile. They’ve got a few good records out. They’ve toured with Lemuria and Against Me. They have a Bandcamp page and some write ups on Punknews.org But they’ve remained ‘in our queue,’ so to speak.

As a bonus, we’re stoked to see a full set from DC’s Max Levine Ensemble. They played the Kind of Like Spitting show we wrote about last month, but since our Zipcar was due back at midnight we only got to catch a song or two. The band with a jazz-band-sounding name has been around for more than a decade now, and has often drawn comparisons to the Ergs, but we’re going to go on record and say we like them better than the Ergs because they’re not as cute. Pop punk is already inherently cute, and these guys avoid the trap of making songs that are too cute by half.

Crimes isn’t cute. Crimes is from somewhere around here. Crimes is loud. Crimes is one of the Baltimore bands you need to know about this Summer. It would be a crime to miss out on them.

Golden West Cafe is at 1105 W. 36th Street in Hampden. $8, all ages. Show starts whenever the hell they feel like starting it, but late.