If there’s one thing that both locals and outsiders seem to enjoy immensely it’s pointing out that as a Mid-Atlantic city Baltimore has always been “A little bit Northern, a little bit Southern.” One of the strangest and most subtle ways that this phenomenon has manifested itself in our own life is through tea.

Growing up we always had a pitcher of tea in the house, and it was almost always sweet enough to please even the pickiest southern sweet tooth. We were well nigh our teen years before we understood that people put lemon in tea as a matter of course. The stuff at our house wasn’t lemony, but basically tea flavored syrup, and when we’d go to a friend’s house or (God help us) a restaurant we’d inevitably be served tea that was either mildly or drastically disappointing. 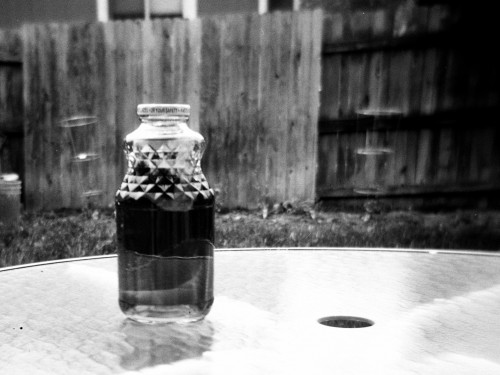 As gourmet as it gets. Nothing fancy, just tea.

The twist here is that in the dead heat of Summer, like many houses in Baltimore we would often have a gallon jar of sun tea sitting out on the front stoop. Sun tea is an explicitly Southern tradition, but somehow when we’d make it we’d drink it dry, or yes, even sometimes with lemon. It just kind of made sense. It’s hard to get half a pound of sugar to dissolve without boiling it, and a July heatwave gets so sticky that syrupy tea is just less appealing.

Now that we’re all grown up with a house of our own, we still keep a large pitcher of tea in the fridge year round, and in the Summer months, still set a jar out on the stoop to heat up in the morning and ice it down and drink it in the afternoon. Today, we’re breaking out the sun tea jar. You should too.

HOW TO BREW SUN TEA:

You get yourself a jar. Any size jar you want, really. A gallon is best if you’ve got a handful of people in your house or if like us you drink tea all day and all night. Wash the shit out of it, because: bacteria. Fill it up with Baltimore City tap water, which is delicious and is the best possible water to use for making sun tea. Put in 5 or 6 tea bags for a gallon. Use regular-ass Lipton or Luzianne or whatever. Let it sit in the sun for 3-5 hours. Drink it.

Perhaps the thing we like most about sun tea is its absolute simplicity. In a Pinterest/Martha Stewart/foodie fetish culture it is absolutely impossible to improve on basic sun tea. Using fancy tea doesn’t turn out any better than simple black tea. Adding in exotic fruits or herbs is something people do, but we wouldn’t say it’s an improvement.

Even buying a fancy serving vessel from Williams Sonoma or getting in on the latest dumb trend of serving things in mason jars to impress fools is not an improvement. Any re-used (glass) jam jar or pickle jar or apple juice bottle is more authentic and down-home, and in a city like Baltimore they’re a lot less likely to get stolen right off your stoop.