Political news has been pretty slow lately, believe it or not. After King Romney was finally awarded the nomination which was his sacred and inalienable birthright everybody kind of took a nice little breather for a while. Luckily for those of us who enjoy politics-as-bloodsport that all ended when Joe the Biden went on Press the Meat and said what the whole administration had been thinking all along: that gay people should be able to get married and that Barack Obama thinks that’s okey-dokey-artichokey.

Even though that in and of itself is a “BFD,” it was still only about a one week story. And it was last week’s story. The thing that everyone is talking about this week basically comes down to “What the fuck actually is private equity anyway?” 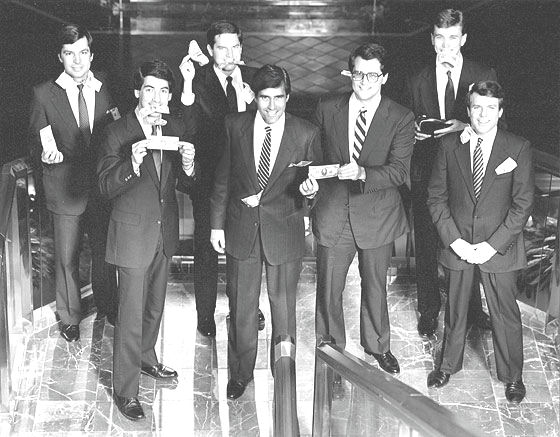 No internet meme can make this picture more bizarre or disturbing than it already is.

Basically, private equity is the money that really really extraordinarily rich people use to buy whole companies or large shares of stock and then flip what they just bought for as much profit as possible. Think of it like this:

You just bought an old classic Mustang because your neighbor lost his job and is selling it dirt cheap, not because you like cars or have any particular interest in Mustangs, least of all this shitty old one. So you have three options. You can:

Private equity firms buy companies, and then they basically do one of those three things to them. The reason why normal, decent, hardworking people are disgusted by private equity firms is because that’s really a reprehensible way to behave.

If we stick with our Mustang example we can imagine that your neighbor probably had some pretty high hopes for that car. He might have had one like it in high school. He was probably planning on doing the restoration himself, getting his son to help out on the weekends, father/son time in the garage and all of that. He was probably constantly daydreaming about taking his wife out to the drive-in after it was finished, maybe even driving in a parade or entering a car show. He was probably hoping he could get a modest return on the investment after all that, or possibly even hand it down to that same son.

But he lost his job and he had to sell the car to make the mortgage. Now when he comes home he sees it in your driveway instead of his. He knows damn well that you don’t care about it, and it hurts every time he sees a part sold off, and even more when he hears over the fence that you flipped it for twice as much as you bought it for, just because you could place an ad and wait and didn’t have to sweat for your mortgage this month.

Mitt Romney and Bain Capital have done this not to single neighbors, but to entire towns and companies. Separating Romney from Bain is as impossible as separating Dick Cheney from Halliburton, or the whole Bush family from the Carlyle Group. Romney is Bain.

One distinct but closely related point we want to make before we end this post is this: Nobody ever created a job as a favor. Employers hire when they are forced to hire, and not a minute sooner. This is an idea that we’ve told to anyone who will listen for years now. It’s why corporate boards and shareholders are so intensely focused on productivity numbers, and why they would rather run every employee ragged on mandatory overtime than hire new ones, and prefer to hire part-timers, temps and contract employees whenever possible. Creating real jobs is an investment. It’s especially an investment if they’re going to train their own employees, which no one wants to do anymore. It can be an expensive investment for a company to make, and while the benefits are real, they are seldom immediate.

We’ve finally started to hear this idea given slight attention in the news: that in a consumer driven economy, it’s consumer spending that is the root cause of job creation. We highly doubt that Romney ever created any jobs, let alone the 100,000 he claims, but one thing is certain- any jobs that he created, he did it because there was an absolute need to hire and not as a favor to the working man.

The Baltimore chapter of Drinking Liberally meets at Liam Flynn’s Ale House tonight at 7 pm. Meeting is free and open to Liberals and Progressives of all stripes. Just look for the red, white and blue bottle on the table. 22 W. North Avenue in Station North.