One of the best aspects of shopping for furniture at Su Casa is the convenience of having several professional interior designers on staff who are available to consult on anything from finding a small accent piece to designing an entire house floor to ceiling.

Aside from being the design face of Su Casa, Mary, Derek, Leslie and Heather also fit about a thousand other tasks into a typical workday- one of which is writing and maintaining the Su Casa Design Blog. In it they cover everything from traditional to modern pieces, original artwork, holiday decorating and more. How could we not love a blog that seeks to marry fashion and home decor?

The current view of our living room, with Su Casa chairs as the centerpiece.

Back in January, owner Nick Johnson even contributed a post himself telling people to Shop Anywhere. Just the same way we wouldn’t want to dress head to toe from any one fashion retailer, we couldn’t quite fill up our whole living room from Su Casa. We got our biggest pieces there, but in the end we wound up sourcing things from other furniture chains, from the mall, from antique/boutique shops, from thrift stores, and even from Etsy. And hey, we’re not even done yet. So while we wait for our new couch to arrive from Pad any day now, we’re going to show you some of the non-Casa items we’ve added to the space. 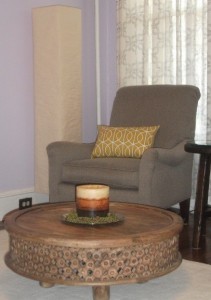 This coffee table is an ideal match with our Surya rug, since they were both hand-made by artisan craftspeople in India. Initially we were exploring coffee tables with some sort of storage feature or at least tiered shelving underneath the table surface, so even we were surprised when we settled on this one. It’s pretty hard to not love it though.

The solid, hand-carved mango wood is pretty rustic, although the lines are actually quite modern. The recessed legs lend it the appearance of floating above the carpet, and at just over a foot high it’s much lower than a typical coffee table, although everything else we’ve chosen has a low profile, so it fits nicely into the room.

A nice feature of round coffee tables that we hadn’t considered before is the fact that it’s almost impossible to walk by it in the dark and bash your shins on it- great for a smaller space like a rowhouse. 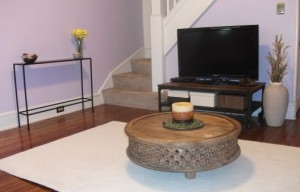 Did you catch that? We moved the table from the first picture across the room. We’re going to be doing a lot of re-arranging in the next six weeks or so, figuring our where things look best and feel most natural. Depending on how it shapes up, we may buy another one of those little console tables. Maybe two more, even. They’re so slim and minimal they can serve almost any purpose in any room.

When we first encountered this sort of table we were instantly impressed, and knew right away it was what we wanted for our room. Unfortunately the store where we found it had it listed at $499, which is a bit much even for a piece that’s handmade by a family-run shop in Minnesota, which this is. It took quite a bit of searching, but we eventually found this one for a very reasonable $179. So if we want to buy a second one it’s nice to know we can actually afford it. 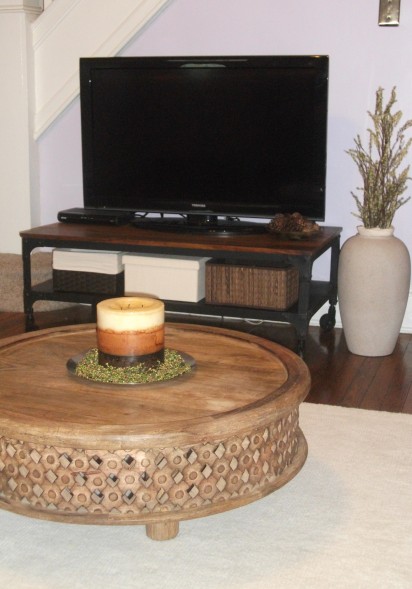 It was extremely important to us to choose the right size television. When Roommate lived here he had a 47″ flatscreen, and we actually had to talk him down from getting a 60″ model. It was just too big. We really only sat a few feet away from it, and when you factor in the TV stand and his massive collection of DVD’s it stole half the space and made the room feel small.

We settled on a 40″ screen, which is big enough to look big but not so large that it takes over the room.

Only after that did we start shopping for something on which to keep it. Su Casa provided some inspiration for us with their reclaimed wood factory cart. It’s an impressive piece, but it’s just a bit more industrial than we wanted for our space, so we found a somewhat more subdued version in a small boutique store.

It’s proven to be a great choice for us in that it not only matches the steel of our console table, but also fits nicely against the stairs. We knew we didn’t want a traditional entertainment-center type piece, but we had to find something that could manage the all-important task of keeping cords and cables hidden, and this cart does a pretty good job of that. Take it from the Chop- nothing will ruin a beautiful room design faster than a mess of cables splayed all over the place. 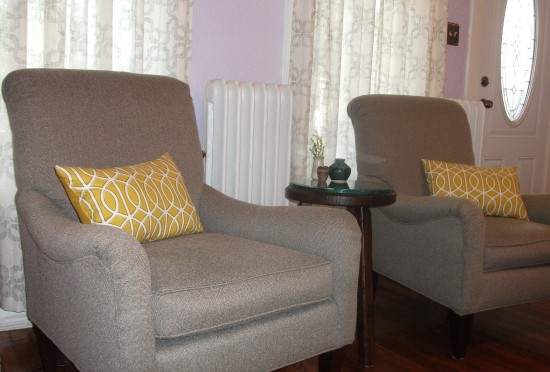 Some new pillows for our Highland chairs.

Here’s the part where we come in under budget. We had long had our eye on this particular fabric pattern from a snooty design studio. The problem was that we didn’t want to pay snooty design prices for pillows. Since we can’t sew much more than a button, we took to the internet to find someone who could. Rather than pay $80-90 each for designer pillows, we tracked down an Etsy seller who sews pillows from designer fabric and sells them for $15.

We also saved on a pedestal table by not buying an actual table. Instead we discovered this solid wood stool on clearance and ordered a separate glass tabletop to protect its surface. The end result is a very unique piece, topped off with a few thrifted mini-vases which cost us only a buck apiece. The accents on our console table were thrifted as well.

We’re still (ahem) ‘on the edge of our seat’ waiting for our new sofa, but for now the living room is finally beginning to feel more like an actual living room than just some empty space we walk through, and the Chophouse is starting to feel like home.

This post is part of our entry in the Test it, Blog it, Win it contest. For the rest of the posts in this series, click here.