Walking around and looking for a drink in downtown Baltimore can make you feel a little like Goldilocks. The Inner Harbor bars are too touristy and overpriced. The non-touristy places, like Midway Bar are too sketchy (and overpriced). But if you look hard enough, you can find a bar that’s juuuuust right.

Most people have never heard of Peter’s Pour House on Mercer Street as it’s officially known and located. But almost everyone can recognize it as one of those places they’ve gone past a million times but never actually seen the inside of. We’ve seen the inside of Peter’s, and we’re here to tell you it’s a pretty great bar.

The main thing that makes Peter’s a great bar is the fact that it’s a bar-bar, or a bar with no discernable theme. Even better than that, it sits square in the center of downtown Baltimore, but resists any tendencies toward becoming a Baltimore-themed bar, á la Nacho Mama’s. You won’t find a ton of Oriole birds and Mr. Boh’s plastered all over the place which is a welcome change from a lot of places around town. 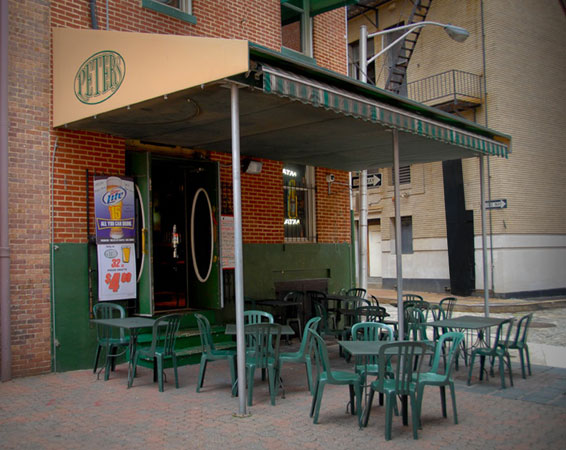 Unlike most business/lunch hour places, Peter's is open until 2 am.

Peter’s clientele is made up of roughly equal parts downtown office workers, locals on their way to or from the stadium, and hotel/convention type people staying nearby. The one thing that all these people have in common is beer and their love of drinking it, and Peter’s doesn’t disappoint in that regard. Their House Specialty is a 32oz domestic draft for $5 every day/all day. Thirty two ounces. That’s 2 2/3 beers. It’s made Peter’s a pre-game favorite of ours during baseball season, and we’re not too proud to drink Coors Light at that price, but their dirty little secret is that you can also get a 32 oz. Shiner Bock for another fifty cents. That’s an upgrade we’ll buy every single time.

For those of you who are even pickier than that about beer, they make the most of their taps balancing the macros by offering Harpoon, Yards, Resurrection, Fat Tire, Sam Adams Seasonal, and two selections from Fredrick’s Flying Dog Brewery.

The bar-bar theme even carries over into the food, and Peter’s serves lunch and dinner with daily specials whose Maryland origins come through on the palate and not in some sustainable locavore manifesto printed on the menu. You sit outside in their awesome covered outdoor seating area for happy hour and you get some steamed shrimp or a hot roast beef sandwich with your giant beer and you can see just enough of Light Street to think ‘Man. Look at all those suckers stuck in traffic. They are there and I am here. I must be doing something right.