Most people are pretty predictable drinkers. There’s definitely something to be said for having a go-to drink that can see you through thick and thin. It’s a great feeling to walk into your regular bar, good day or bad, and see your favorite bartender at the ready- say ‘I’ll have the usual.’ Sometimes though, you need a little variety in life. Sometimes you may find yourself someplace else, where the un-usual is par for the course.

Sometimes you’ve got to go with the flow, and often that means the flow of the taps. You wouldn’t call for a complex cocktail in a rock and roll club, and you wouldn’t ask for a Boh at the four Seasons (Although apparently, they have it). Today we present you with our quick-reference guide to house specialties and best bets for some of our favorite bars in Baltimore. If you’ve never been to some of these places, you really ought to check them out. And if you do, take a word of advice from the Chop and order accordingly. 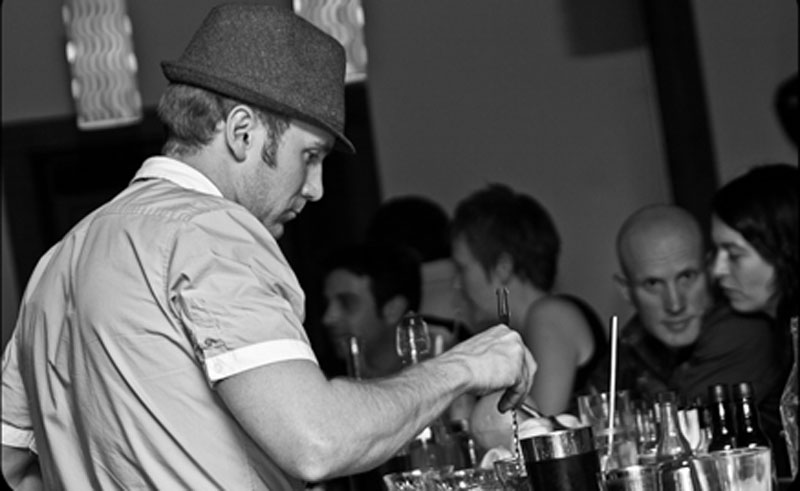 if your bartender is wearing this hat, you should probably just turn around and leave.

Any wine bar or tapas place: Go for the ‘gria. Wine bars are very wine-centric (duh), as are most tapas joints. As we’ve already stated, we prefer our wine from a box, so we’re not impressed much by tasting flights and ‘good years.’ If the place you’re in offers a house-made sangria, it’s going to be the cheapest stuff they’ve got, doctored up to taste better than some of the best stuff they’ve got. Sangria is almost always the best bargain in the house.

Bertha’s: Bertha’s Best Bitter. Enough iconic Baltimore landmarks have fallen by the wayside that it’s fair to say that landmark status alone isn’t enough to keep a place in business. Bertha’s is still there though, and still hand pouring the beer that was literally born in the bar in 1988, which is all but pre-historic in craft beer terms. BBB is as local as it gets, and as good as it gets too.

The Brewer’s Art: Ozzy. Brewer’s has long been famous for its signature Resurrection ale, but for our money Ozzy’s the only way to go if you’re drinking here. Lighter, crisper, a bit fruity without containing any actual fruit; it’s easier to drink than Resurrection while actually being slightly higher in ABV.

Clementine: The Stonewall. We’ll tell anyone who will listen that Clementine has probably the best cocktail list in the city, which is part of the reason we’re so excited for the debut of their second location at the Creative Alliance on May 24. it’s hard to go wrong with anything from their bar, but The Stonewall features Pear Cider, Bourbon, and Ginger Liqueur, and is simple perfection in a glass at any time of year.

Club Charles: A Martini. The inside of Club Chuck shouts dusty deco decadence, and there’s probably no better place in Maryland to enjoy a proper Martini. They’ll serve it up in a generous glass and right to spec. Stop by for Martini Mondaze, (Mondays) when they’re on special and there’s enough elbow room not to slosh your second one all over the bar.

Heavy Seas Ale House Gold Ale. If you’re going to a beer-branded bar, we’re just going to go ahead and assume you’re there for that bar’s brand of beer. There’s plenty of choices under the Heavy Seas banner, and nary a bad one in the bunch. If you’re making a day of it, try them all. If you’re just popping in for a quick one though, Gold Ale is a perennial favorite of ours. We recommend it highly.

Idle Hour: Chartreuse. When you walk into Idle Hour and see so many bottles of Chartreuse lined up on display, it’s hard to ask for anything else. Watching those green bottles shimmer in the dim red light makes it almost impossible to order anything else. Idle Hour sells more Chartreuse than just about anywhere, so don’t be shy about asking the bartenders if they’ve got any Carthusian mixological tricks up their sleeves.

Joe Squared: Something rummy. You wouldn’t expect an inner-city pizza joint to specialize in rum, but Joe Squared boasts a better rum selection than most tiki bars, including ones in resort towns. In fact, Joe may be the only place you can try some of these rums without annoying tourists and tacky decor all around you. They’ll make up a proper version of any classic rum drink, and have a few of their own that measure up to the old classics.

Little Havana: A Mojito. We’re not going to aver that Little Havana makes some life-changingly great Mojito, but they do make a lot of them. Most bars don’t keep a ton of fresh mint on hand, and most bartenders are painfully slow with Mojitos. That’s not the case here. Little Havana sells so many of these things that the bartenders can make them with their eyes closed in the time it takes to pour a Bud Lite, and they won’t cost you $12 each, either.

Mount Royal Tavern: The Pikesville Manhattan. A Pikesville Manhattan has been the Tavern’s signature drink since forever. It comes in a topped-off rocks glass, and the last time we ordered one they were still $2.50 (although, admittedly, it’s been a while). They may not be the fanciest drink in town, nut they might just be the strongest.

One World Cafe: A Bottle of Wine. Wine is usually the last thing we’d order in a bar, but One World Cafe is no ordinary bar, and their wine list is no vin ordinaire. Okay, maybe it is a little ordinaire, but that’s the beauty of it. Their small wine list is full of some of the same bottles you’ve probably brought home a few times, and they aren’t marked up too high. If memory serves they’ve even got a weeknight wine special, so a bottle of wine will carry you from happy hour through dinner, and all the way to your vegan dessert.

Ottobar: National Bohemian. It’s a rock club. The rules are basically the same at all rock clubs- you paid a cover to get in and you’re mostly there for the music. There’s probably a crowd, which means volume behind the bar and not much space in front of it. Order generic beer or rail highballs and keep them coming. Save the fancy stuff for the fancy joints.

Peter’s: One of Baltimore’s best kept open secrets, Peter’s (near the corner of Saint Paul and Water streets) offers 32 oz domestic drafts including Yuengling every day all day. For fifty cents more you can upgrade to Shiner Bock, which might be the best beer deal in the city.

Rocket to Venus: Crispin Cider. While Summer may be the season of rock music and cheap beer, man cannot live by Boh alone. RTV Has Crispin on draft, and serves it over ice in a tall 22 oz glass, making it the best possible thing you can drink on a hot Summer day. Unless it’s happy hour, then go for the toddlers.

Rye: The Pony Express. The thing we like most about Rye is that it seems to succeed without trying too hard. This classic-cocktail type bar has only a small handful of drinks on its cocktail menu, but it only really needs one. The Pony Express is their own take on a forgotten recipe, and is a perfect balance of Overholt, local honey, citrus and Prosecco. At $7, you’d be wise to make it your signature drink as well.