Anyone who’s seen the inside of enough bars can easily tell a good bartender from a bad one. There are certain places which have great reputations for service, and hire nothing but good bar staff. Unfortunately, there are even a few places where the opposite is true and there’s not a decent barkeep present any night of the week. Most bars fall somewhere in the middle of that equation, and the bigger and busier the bar the more discerning you have to be in sizing up your bartender.

And you should always size up your bartender. They’re sizing you up, to be sure. The internet is full of top ten lists of bartenders’ complaints about customers, and every time you walk in they’re wondering which one of those stunts you’re going to pull. What’s seldom acknowledged though is that sometimes bartenders are shitty people who have no clue about the intricacies of drinking culture and are wholly unsuited for their jobs. It happens sometimes. People are often hired because they’re good looking or they’re a friend of a friend or they happened to be around when there was an opening. 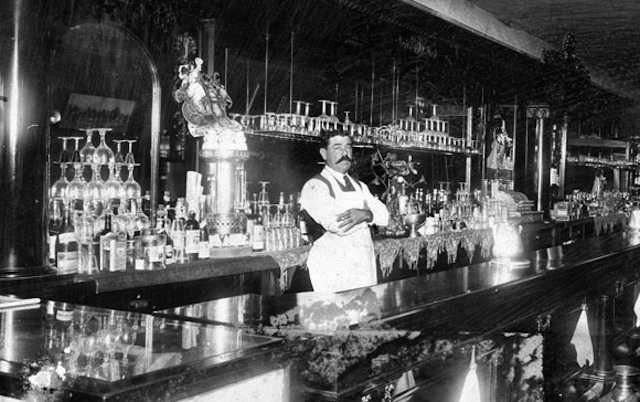 A good bartender never lets a drink go to waste.

We had the misfortune to encounter one such bartender this weekend. If she wasn’t new to bartending she was at least new to this particular bar. It was pretty clear right away that she wasn’t the A-team, and would have probably been more comfortable being broken in on a slower weeknight shift than a busy Saturday. She poured us the wrong drink, and once we got the right drink, she quoted us the wrong price. These are both very forgivable mistakes, but what she did next was not.

What she did next was to pour the extra beer down the drain! It was shocking. It was scandalous. It was one of the most pointless, stupid and amateur things we’ve ever seen done behind a bar. A freshly poured pint of perfectly good beer absolutely and completely wasted.

It wasn’t even the waste of beer that frustrated us the most. It was the breach of protocol. Mispours are a fact of life, and even the best bartenders will end up with extra drinks from time to time. The good ones, however, know what to do with them. Even in the worst sorts of bars with the strictest rules and controls (think airport bars, TGIFridays’ and the like) a good bartender and a good bar manager realizes that a wrong drink, once poured, should not go to waste. While it can’t be sold, even in corporate bar hell it’s understood that it should be given to someone, and that a free drink on someone’s check usually doesn’t replace one they would have bought anyway.

The best way to handle a mispour is to offer it to the customer for whom it was poured on the house. “Oh, you asked for Bud and I thought you said Boh. You can have this one on the house if you want it.”

Failing that, the next best thing is to offer the mispour to a deserving regular- ideally one who usually drinks what was poured by accident. “Hey Frank, it’s your lucky day. I just poured an extra Boh. Here ya go buddy.”

If the extra drink is declined by the original customer, and there don’t happen to be any regulars around, the drink should then be offered to the patron who occupies the Cheat Seat. Anyone who makes a point of sitting close to the taps is likely an experienced drinker and a good customer, and will certainly appreciate a free round. They likely watched you pour it and saw the whole thing and it’s kind of rude not to offer it. Hey buddy I’ve got this extra Boh. Yours if you want it.”

And even if for some strange reason you, as a bartender, have not offered that drink to one of the people described above there’s a pretty good chance that there’s a cook or a busboy or a barback or a just-clocked-out server hanging around who has been working their ass off for very little pay and even less thanks and could sure use a cold frosty beer right about now. Sending a mispour to the cook is always a good move, not just because they’re working over a hot stove, but because they’ll remember your kindness when they end up with an extra basket of onion rings or an overdone burger. “Hey, take this back to Charlie in the kitchen and see if he’s thirsty.”

The bottom line is that a mispour isn’t just an extra beer, it’s a pint of good will in a glass. To let that good will go to waste is an affront to common decency and tavern culture.