In a Baltimore Sun piece last week, the lazy, mediocre Erik Maza took pains to mention four separate times in a 400 word review that there is no telephone hooked up in Murphy’s Law Tavern. “It seems [Bar Rescue's] producers — or the owners — forgot to fix some things. The phone line, for one. I called for several days, and no one picked up.”

There’s a good reason for that. Because it’s 2012 and the house phone at a bar* is completely obsolete.

Erik Maza does not know his way around a bar. Literally. According to last week’s article, he couldn’t even find the entrance because the sign was 12 feet from the door. To be sure, this is more lazy, inept reporting on the part of Maza, but we suspect another factor at play here. Namely, Maza is too young to remember when bars had telephones. 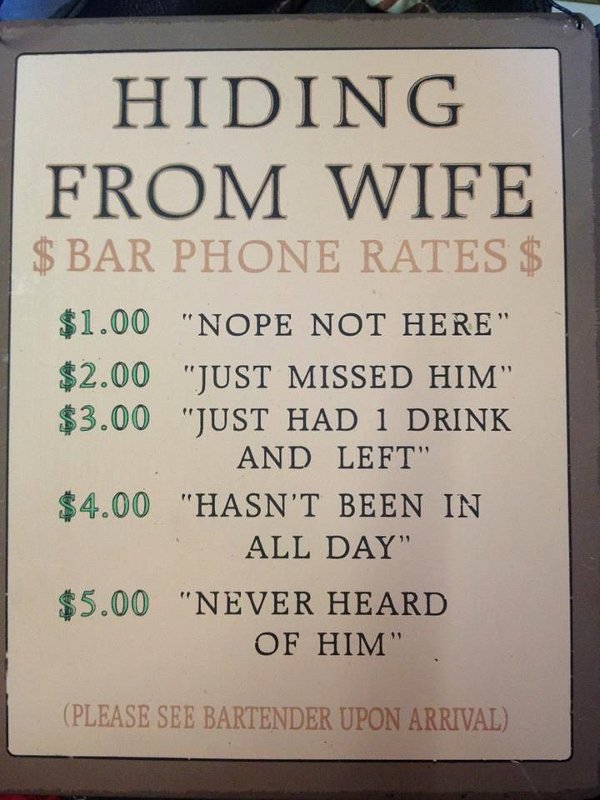 Before the advent of cell phones, all bars had phones that were hooked up. Most bars had two telephones, a house phone and a pay phone. The house phone was for business and the pay phone was for customers. At least in theory. In practice the employees were also the customers and the customers were also friends and family and friends and family were often part time employees and if you couldn’t get someone to answer one phone you would just call the other one. It was a mess.

In some bars you can still find jokey signs like the one pictured above. Like all jokes though, those signs are based in truth. In the old days, when corner bars were public houses and no one had an iPhone, wives actually would call the bar for their husbands. Regulars would call for other regulars: “Hey hon is Bunky down the bar? Put one in the hole for ‘im I’mma come down when I git off work.”

Regulars would call for employees and the owner would have all manner of shady people calling and the damned thing wouldn’t stop ringing once it started. On top of pouring drinks and running the bar and everything else that bartenders have to deal with, they were also made to be receptionists and switchboard operators. In most bars, phone privileges were extended to only the most loyal, least troublesome, and best tipping regulars.

In the cell phone era there’s simply no reason for a bar to have a phone. And if a bar does have a working house phone, there is very little incentive for them to answer it regularly. Many bars are closed during the day and are working at night. All the patrons finally have their own phones, and anyone doing business can call the owner or manager’s cell phone directly. Maza says he tried the owner’s cell several times but the great thing about cell phones is, they screen calls. If we had some hipster dufus repeatedly calling us just so he could shit on our bar in a lazy review, well, we wouldn’t be in much of a hurry to pick up either.

We may watch reruns of Cheers and think that Norm dodging calls from his wife is a quaint TV gag, but it used to be an everyday occurrence in bars nationwide. Bottom line, bars are better off without phones.

*In this context, “bar” means a neighborhood tavern or dive bar, of the sort that Murphy’s Law is.