So, we guess we gotta go see Those Darlins tomorrow. We haven’t really got much choice in the matter. The show’s not gonna watch itself, as they say.

It was a lot easier to stay home the last time they played at the Golden West. It wasn’t even that long ago- March 31 to be precise. 2011 Has been a pretty long year though; not just for us, but for the Darlins as well. 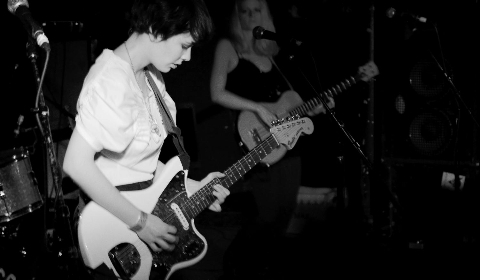 Those Darlins bro down at Golden West tonight. 10 pm doors.

At the end of March, they were a relatively obscure novelty act playing new old-fashioned country songs in the types of places where the beer special is the draw and the music is an afterthought. But that was before Screws Get Loose. With the release of their second album, Those Darlins have made a hard pivot from aww-shucks country to full-on psychedelic garage rock. They were pretty good before, but now they sound like Stevie Nicks on acid getting fucked by Hunter S. Thompson. And we mean that in the nicest possible way.

You don’t have to just take our word for it though. Now that we’re a fancy-schmancy legitimate website we can actually embed video. So just for the hell of it, here’s the video for Screws Get Loose.

So yeah. We have to go see this band tonight, at this particular point in time, because who knows? By the next time they come around they might have reinvented themselves all over again. They’re already getting a lot of love from some very ooh-la-la critics like Rolling Stone and Garden and Gun, and even NPR is singing their praises. Twelve months hence they might be too high-falutin’ for the Golden West and we’d have to go down to that awful tacky cowboy themed bar at Power Plant Live. We don’t want to do that.

And if we wait til then, we won’t get to see The Matrimonials, who are probably the single most underrated band in Baltimore right now. Don’t believe us? Go over here and stream their cover of Can’t Hardly Wait. Any band that can be so ambitious as to cover the Replacements, and make it sound better than the original is the kind of band we want to see a whole lot more of.