Today is an important day in the city of Baltimore. Double Dagger will play its penultimate Baltimore show tonight at the Charm City Art Space. If you don’t know or care who Double Dagger is, or if you don’t think tonight is important, then you can go look at some fucking cats or something, okay? For the rest of us, Double Dagger frontman Nolen Strals was kind enough to sit down and answer a few of our questions about the last 10 years of his life… 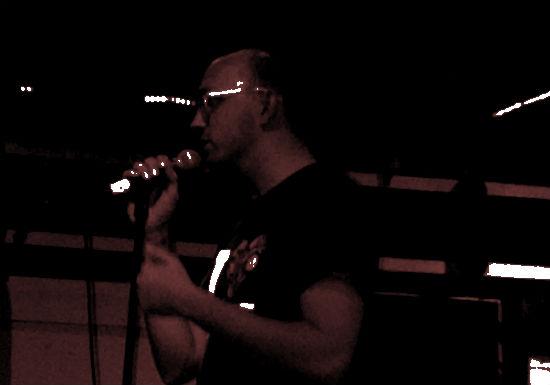 So, why did you want to be in a band in the first place?

In high school I wanted to be in a band just because, you know, I was young, newish to punk and it’s ideas and ideals and I was an angry kid in a small town with a lot to say. Being in a band gave me a chance to say things that were important to me. Sixteen years later I’m still in bands partly for that same reason but with new things to say. As anyone who knows me can attest, I usually have a lot to say. I’m full of ideas and opinions and I’m not afraid to let people hear them.

Also, it’s just fun as hell to play shows. Double Dagger shows are almost always really fun, interacting with the audience. We’re giving them something, they’re giving us something back. I sometimes feel as if the crowd at the right show is like a fourth member of the band. Seeing people flip out for our music, hearing them sing along… there’s no questioning why I’m in a band when that’s happening. We all feed off that reaction.

What were your goals as a band? Do you feel like all of those goals were met?

When Double Dagger started I think we just wanted to be a really high energy, smart-ass post punk band… In the middle years, when our original drummer Brian Dubin left and Denny Bowen joined full-time I think we were trying to figure out how to take the Double Dagger formula of spare bass, drums, and vocals and beef it up, fill it out, push that reductive combination further. The band as a whole got more serious, taking more care with our recordings, putting more effort into playing out of town and touring, etc. We definitely met or exceeded all of those goals. Touring-wise we exceeded it by going to Europe for almost a month in 2010.

I think when we started people didn’t take us too seriously, and I’m really proud to say that I think a lot of people respect the band now. A ton of bands are liked or loved, but respect is harder to come by, and I think we earned that through the music we wrote and the way operated.

Looking back, would you have done anything differently?

I wish we’d played more benefit shows, especially ones to help local organizations and causes. We care a lot about Baltimore City and that’s reflected in our songs, but I think our actions could have showed it a little more.

Baltimore could definitely use a bigger act like Fugazi, who played a lot of benefits and encouraged other bands to be more civic-minded and philanthropic.

Totally agree. Bands who have a big draw have the ability to use that for more than just selling tickets. You can have an impact beyond that especially when playing locally, so there’s no reason not to.

We’re a band that crosses a lot of the scene barriers in Baltimore. I love that we draw punk and hardcore kids as well as the art school warehouse types, plus high schoolers and old dudes. I think at times we pigeonholed ourselves to certain types of shows. Basically I just we’d played with more hardcore bands in the later years.

This final stuff you’re putting out is your last chance to design one of your own releases. How are you possibly going to top Masks?

We’re thinking 1/6-scale vinyl toys of all three members with 9 points of articulation (11 for Denny), and when you pop the head off, a USB drive holding the songs is sticking out of the neck. Either that or something more traditional… we’re still hammering out the details.

What advice would you give to someone starting their first band today?

Think. Practice. Practice. Think. Practice. Practice. We were a part of a generation of local bands who spent a few months figuring out their songs, their sound, and what they wanted to do before ever playing in front of people, because they wanted their first show to be as good as possible. They wanted people to take them seriously. It seems a lot of younger people (but not all) don’t have that mentality. It’s more of ‘Hey let’s just start a band and play our first show next week because we can and it will be cool.’ Those bands don’t last, and unless there’s some accidental genius at work they’re not very good.

Don’t accept that just because certain things are done regularly now, that you should do it too. When you first start out, book your own shows. You don’t need an agent, tour manager, or booking agent within your first several years of being a band. You’ll probably never need one. I’ve heard recently about some relatively new, comparatively tiny bands who have publicity agents and tour managers with them while playing only small DIY shows. That’s some rockstar bullshit. Get real/get out.

Play out of town early and often. Playing in-town all the time is too easy. Play for people who aren’t your friends. That’s a better gauge of what you’re doing. Philly, DC, and New York are all close, and all have DIY scenes that are easy to access so play there. You’ll become better playing for strangers than you will for friends.

What are some of the more important things you’ve learned along the way?

Oooh there might be some bitter replies in this one… The views in this reply are only mine, not speaking for the other dudes here:

I learned hard work is often trumped by internet hype. Accept this early on. The lesson to be learned here is not to go after blog hype. Not if you want to last at least. Very few music bloggers are music journalists (don’t worry Chop, you wrote better questions than we usually get from music writers). Get ready to be let down and, at times, surprised.

Don’t trust the words of people whose job title rhymes with the two words “Hooking…” and uh, I can’t finish this joke because nothing rhymes with “Agent.” Doing it the hard way pays off in the long run.

And if you are going to do something the hard way, be it music or otherwise, you’d better be sure what all the repercussions of that will be in your personal life, and you need to determine if it’s worth it. Sometimes it is, sometimes it ain’t.

If you eat shitty food on tour, you will play shitty shows on tour. Local, cheap, good restaurants trump any fast food ever. It may take an extra 30-40 minutes, but your body will appreciate it. Ask local folks where to go. Fat Sandwiches in New Brunswick, NJ are the best post-show food ever.

Shows in towns that never get shows will always be more fun than selling out huge rooms in big cities. Small town kids will appreciate you going out of your way to play in their no where town more than even the most enthusiastic city dweller. You need to play those shows from time to time. I wouldn’t have gotten into punk rock without that happening for me.

I realize most of these sound negative, but lessons aren’t always easy. The easy stuff happens the rest of the time, and it outshines all the bad. I learned a lot of amazing things in this band and saw incredible places and made great friends in places I never would have gone otherwise.

The DIY Punk Community is international, beautiful, and inspiring.