You probably know by now that this blog is a big fan of local band Poly/Western. We’ve posted about them before and go to see them every chance we get. Luckily, we get another chance tomorrow night at the Sidebar.

We’ve always said that they were a great band who were bound to get better and better, and since the last time we saw them that’s exactly what’s happened. They’ve gone professional.
No more giving away 3 song demos for these guys. If you want the Rock now, you’ve gotta get it from a real, bona fide EP which you can download here for the low low price of $5. They’ve even got a genuine band page on Facebook now, where you can stream songs and such. Of course, if you like them “just as friends,” you can still do that here. 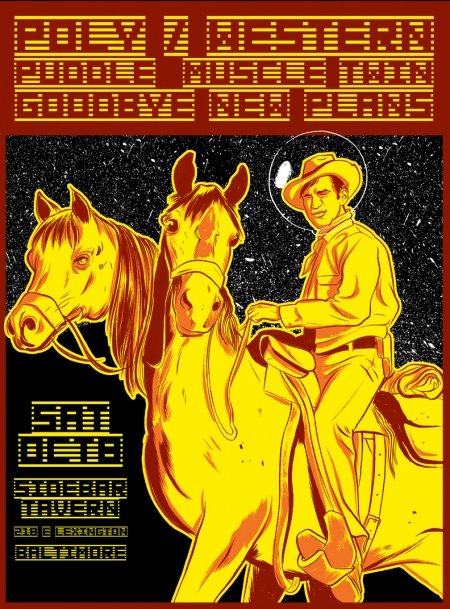 But wait! There’s more! Puddle is headlining tonight’s show. Do you know how long it’s been since we’ve seen Puddle? More than 10 years. Clinton was president. Yet they’re still riding the same groove they were back then: too much like a jam band for the cool kids, and too cool for the hippies. The bottom line is that they kind of sound like Landspeedrecord! if LSR had gone to Juliard and knew everything there was to know about composition and arrangement. Just when you think Puddle is starting to sound a little too much like Mededski Martin and Wood or some crap, they’ll play something that kind of reminds you of Jawbox. So you’re just going to have to go and make up your own mind.

While you’re at it, you can also make up your own mind about Muscle Twin, who play reggae for white people, and Goodbye New Plans who don’t.