We were sad to hear the news a few weeks ago that the Hexagon Space was closing. We’re sad to hear about any venue closing up, even if we don’t go there very often. Fletcher’s, The Supreme Imperial, even Hal Daddy’s; we may have gone there pretty seldom, but any venue is better than no venue in our eyes.

That said, we weren’t exactly losing sleep over it. The law of supply and demand has always governed underground music venues in Baltimore, and sometimes it almost seems as if one space needs to close before someone else will take the initiative to open a new one. Every time we hear about something like this, we’re sorry for it, but more than anything we’re excited to see what new thing the future holds. 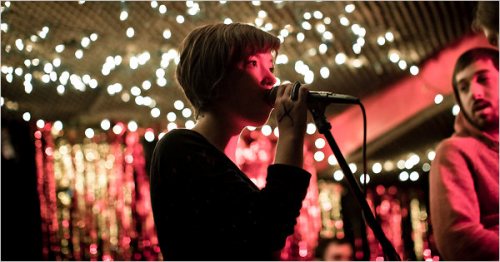 So it is with the Hexagon. The way that City Paper article reads, the thing that takes the Hexagon’s place might even literally take its place, and another DIY venue is not out of the question for that address. The room is a great place to watch bands, but Joy Martin is right… there had to be more shows there in order to make the space live up to its potential. The last time we were there was actually more than a year before the closing.

In the meantime though, the shows must go on, and the scene is none the poorer for losing Hexagon. For instance, tonight the Golden West is hosting a show which is nearly the exact same bill as one of the better Hexagon shows in recent memory. Local favorites Secret Mountains are rejoined by their Philly friends and contemporaries Hop Along and Dangerous Ponies.

If you’re the type who likes taping shows or taking photos of them, this one would be a good choice to document. Three great bands for five bucks on a Wednesday, after all the real-job-having nine to five types have packed it in for the night. This show will be one of those little things that makes Summer so Summery, and if you’re serious about getting your Summertime fun on, this one’s not to be missed.