…And now for something completely different. The Chop is on our way to the Red Emma’s Queer Music Explosion! at the 2640 Space tonight. That might surprise some regular readers of this blog, who are more used to us talking about pretty straightforward punk and post-punk bands. We’re not exactly known for being a fan of synth-driven dance music, let alone uber-queer Portland hippie synth-driven dance music, but believe us when we say that Lovers is one of our favorite bands of all time. Seriously. We’re talking like you can only bring five records to a desert island type of favorites. They’re that good. 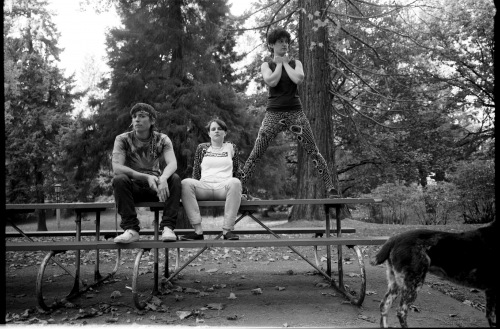 Our first introduction to Carolyn Berk had nothing to do with synthpop at all. It was in (circa) 2005 when Lovers was a very different band indeed. In fact, that night it was just Berk with a chair and a guitar, down in the basement at the Charm City Art Space. Even on that night, stripped down to the barest of elements, Lovers was a captivating band. We went home that night with a copy of the first record Star Lit Sunken Ship, and were blown away by the added textural layers that made the great songs we’d heard performed even better. It’s since become one of our favorite records, and has remained in heavy rotation here at the Chophouse.

Since then, Carolyn Berk has been one of those artists who spends at least as much time gathering inspiration as she has making and selling records. Moving from New England to Georgia before finally settling in Portland, Lovers’ discography has been as varied as their lineups and geography. A quick look and listen at their Myspace page will reveal not only the differences in style the band has embraced in the last 10 years, but also the similarities in mood, tone, feeling and subject matter. Any band that keeps writing the same record again and again will doom itself to irrelevance and cheapen the value of its earlier work. There is no danger of that here.

In the case of Lovers, the band’s musical growth has mirrored its frontwoman’s personal growth, and not since the Beatles has any band been able to depart so drastically from its starting point while maintaining such a consistent sense of purpose and vision. Berk and her bandmates are every bit as good with synths as they ever were with guitars. It’s this sort of evolution that will, for any band, bring in new fans while rewarding the old ones. Since the move to Portland, Berk and Lovers have been embraced by and immersed in the queer community, and fit very well on a bill like tonight’s, but don’t let that fool you. Carolyn’s lyrics have always been as personal and introspective as it is possible to be, and it’s precisely that which makes them universal. As she told Venus Zine in 2009:

“I am all those things, but I’m so much more,” she says. “I think it’s important to be loud and proud, and there’s a lot of pressure to feel marginalized, which is so old and tired. There are tons of straight, male Lovers fans, and I’m singing to everybody. I like to write about universal things because more than any of that I’m a humanist — I’m beyond humanist. I like animals. I’m a hippie. I’m a lover.”

We hope we can convince a few more of those straight, male fans to say “Dan Who-con? Future What-lands?” and come out to 2640 tonight to see what is without a doubt the best electronic band working today, anywhere.

Queer Music Explosion also features Silence Kid, Saddle of Centaur, and The Degenerettes. 2640 Saint Paul Street is a dry venue, and this show is no alcohol, no BYOB. 7:30-11pm.