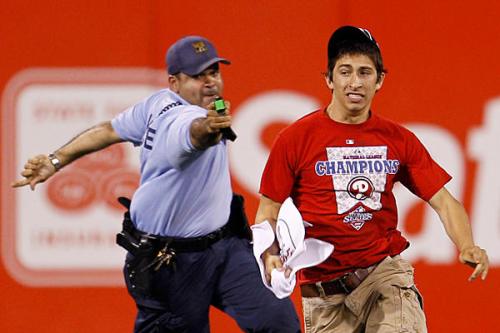 You can feel free to tase a Philly fan. They're all too drunk to really feel it anyway. (photo: Matt Slocum/AP)

The last time the Red Sox were in town, we pointed out in a post that while having our city and our stadium flooded with Massholes and Jersey Mooks is certainly unpleasant, it could indeed be very much worse. This week, although their fans are safely back at home, the O’s are in Boston for a two game set, and that means it’s time for another edition of It Could Be Worse!

If, hypothetically, there were to be a shakeup in the league, we could be seeing the O’s play an unbalanced schedule against any team in the MLB, and between Southwest’s cheap flights, chartered trips for groups, and bandwagon fans, we could be facing invasions of a much different character.

The Philadelphia Phillies. Thank the little Baby Jesus that it’s DC who has to deal with these douchebags and not us. Phillies fans were recently named the worst in all of sports by GQ, and with good reason. In Baltimore, we don’t tailgate baseball. We have our drinks in a nearby bar, like gentlemen should. If we played the Phillies we’d be overrun by an epidemic of public drunkenness. There’d not be a single lot or garage downtown that didn’t reek of piss and skunked Yuengling, strewn with empty cases and crushed green glass. You see, you’ve got to drink a lot if you’re going to intentionally use vomit as a weapon against an 11 year old girl.

As you can see from the picture in that link, Philly fans are wont to soak up all that booze with some of the worst food on the planet. To them, the four food groups are chopped steak, fried onions, greasy rolls, and Cheese Whiz. The cheesesteaks are just the appetizers though. Over the course of a 9 inning game, these slobs will pile in Italian cold cuts, soft pretzels, a ton of Tastykakes, macaroni, stromboli, and whatever else they can get their greasy hands on. Whole sections of Camden Yards would need to close for repairs after each series, as the seats just aren’t designed to hold that much weight.

Perhaps the worst part of playing the Phillies though would be having to put up with the ESPN broadcasts. Philly is right up there with Boston and New York in being ESPN darlings, and they’ve hosted two Sunday Night Baseball broadcasts in the last three weeks, as well as Monday and Wednesday Night Baseball this week. Dan Shulman, Orel Hershiser and Bobby Valentine are all annoying blowhards who are more interested in hearing themselves chatter than actually calling plays in the game. Last Sunday’s broadcast was unwatchable, with cutaway shots after every pitch, heaps of praise on superstar players whether they perform or not, and footage of the fucking mascot while there’s a hitter in the box. They even missed showing a home run on the first pitch of an inning, because they were too busy talking about John Kruk stuffing his fat face with a cheesesteak or something equally dumb and unimportant. If they ever try to bring that shit to Baltimore, we say let’s turn them away at the city line.