The Chop is a stand up guy. How do you know you can trust the Chop? Because we don’t fool around with office buildings and churches and meeting rooms and all of that mess. All of our most important business, and most of our life decisions are conducted properly… down at the bar.

People often ask how we got started in our career, and the answer is “by talking to some guy in a bar.” We sold a car in a bar once, and rented an apartment too. We’ve borrowed and repaid money, made several major life choices and met some of the most important people in our life. Of course, we’ve also cashed a paycheck or two. 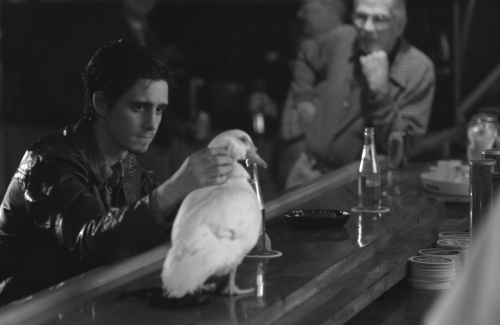 Baltimoreans have a knack for conducting business in bars; whether it's legitimate, illicit, or duck-related.

In this thoroughly modern world even going inside a bank branch is considered a somewhat old-fashioned activity, but we remember a time, if only vaguely, when people eschewed banks in favor of the financial services available at the local bar. Time was a man would get his check on Friday afternoon and carry it straight to the bar, where they’d cash it for him and he’d drink a certain portion of it after a hard week’s work. He might even take a part of it home as a money order in the amount of his BGE bill or car payment.

It’s strange to think of now, in an era when “totally free” checking, free debit cards and free online banking are the standard among banks, but for most of the 20th century a very large number of middle class people didn’t even have bank accounts. Those that did often used them primarily for savings, as opposed to checking, credit cards and other services. If you’re old enough to remember things like passbook savings and balancing a checkbook, then you know that those things were such a headache that they would drive a man to drink; with their minimums, monthly fees, long lines and bankers’ hours. Back in the day, it was just easier to manage your money in cash with the help of your favorite barmaid.

That’s to say nothing of another big advantage to doing your banking at a bar… the ability to hide money. If you’re flush, there’s seldom any need to hide money. Who among us is always flush though? At one time or another, we’ve all been hesitant to deposit a check because we never learned to balance a checkbook and we might come up short. If you’ve got an auto-pay bill or an overdraft fee looming, direct deposit can really fuck you when you’re trying to figure out who to pay first. Keeping your check away from the bank will allow you to insure that top priorities like the mortgage and grocery bill get paid, and the rest can wait if they have to.

Then there’s the wife. If you got a few hours of overtime on the check this week, well, she doesn’t have to know about that, does she?

For the most part these days, bar owners are out of the check cashing business. Only the oldest of old school bars do it (reluctantly) as a favor to their most regular and long-standing customers. Our own finances are more advanced than we ever thought they’d be, with our fancy free checking and credit cards and electronic transfers. Sometimes though, we miss our own little cash economy, and not having to stop at the bank before we hit the barstool.