The Chop is jumping on the Bolt Bus and heading up to New York for a party tonight. As much as we’re loathe to admit that any city anywhere has some advantage over Baltimore, and especially New York City, we can’t deny that there is one aspect in which the Big Apple is thoroughly and completely superior: free food at happy hour.

The tradition of free food at happy hour traces back to some time of yore in some place that we don’t really feel like Googling right now. However it is mentioned in Upton Sinclair’s The Jungle (1906) in a scene in which Jurgis is low on money and chooses to go to the bar and buy whiskey in order to enjoy the free meal being served with it. 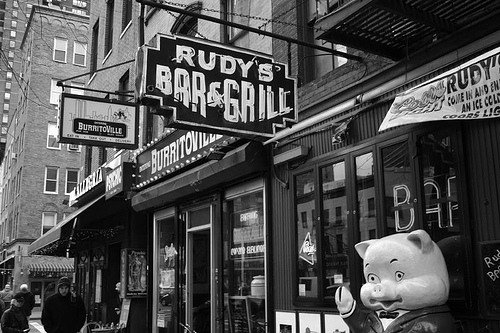 Rudy's in Hell's kitchen has been giving away hot dogs for decades and hasn't gone broke yet. Baltimore bar owners, please take note.

The Jungle is set in Chicago, of course, but we believe the tradition of free food to have originated in Manhattan, probably in bars with specific ethnic clienteles who all enjoyed specific ethnic foods. Rudy’s Bar in Hell’s Kitchen has made itself famous nationwide as ‘the place that gives away free hot dogs all day every day’, and any New Yorker who is hungry or broke or both can easily pull up many lists of plenty of bars which are more than happy to feed customers for free during happy hour. And we’re not just talking wieners here; these bars are serving up everything from dogs and burgers to wings, hummus, cheese plates, pasta dishes and even bagels and brunch spreads on Sundays.

In an era when people are as thirsty as ever and still feeling the lingering effects of the Bush Economy, free food at happy hour makes perfect sense. Baltimoreans are always quick to embrace a deal, and a local bar scene in which taverns compete not on the basis of who can throw the best dance party or tap the most microbrews, but who gives away the best and most food is a winning situation for everyone.

If Baltimore wishes to hold onto its claim of being The Greatest City in America, we need to get our act together on the happy hour food giveaways.