What could Mr. T’s mother, toilet training for cats, herpes, and puppet aerobics all possibly have in common? Only the fact that someone thought they were not worth watching, and so they all ended up in some thrift shop or garage sale or flea market or video-outlet bargain bin, where Joe Pickett and Nick Prueher decided that they were worth watching.

Pickett and Prueher are the founders and coordinators of the Found Footage Festival, a collection of old, odd and obscure videos which have all become entirely divorced from their original context, and have been sewn together as a sort of patchwork quilt of the VHS era. Now in its fifth series, the Festival will come to the Creative Alliance tomorrow as part of a 75 city US tour. 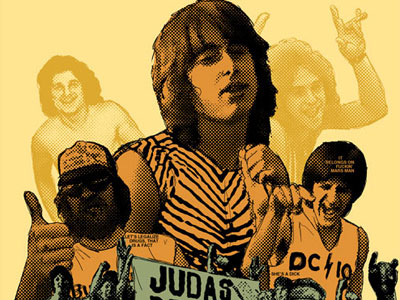 Now, you may be thinking to yourself, ‘Pfft, I got Youtube… why do I need to go to the Patterson just to see assholes make assholes of themselves?’ Because it would take you weeks and months to navigate among the billions of videos out there on Youtube, and even when you find something on the order of the Video Guide to Successful Seduction it will not have been edited, and it would be a full time job just to watch this much 80′s camp on your own. Prueher and Pickett know from comedy, having worked for the Onion and the Colbert Report respectively, and they’ve done all the work for you with the FFF, as well as added some of their own insights into this particular corner of the culture, having viewed about a million hours of footage between them.

But that’s not all… They’re also presenting John Heyn and Jeff Krulik’s cult classic Heavy Metal Parking Lot. Shot in the early days of personal camcorders in Landover, MD, the short was dubbed and passed hand-to-hand for years, and has rarely been shown on a theater screen.

But this is where the Creative Alliance excels, in showing things that you can’t possibly see anywhere else. Everything looks just a little better on the silver screen, especially things like the Found Footage Festival, which is solid video gold.

Creative Alliance at the Patterson is located at 3134 Eastern Avenue in Highlandtown. Tomorrow’s showtime is 8 pm.