The Chop is not a lawyer. We’re not a banker, a military officer, or a city councilman either. Somehow though, we ended up as one of these people for whom everything has political overtones. We make no bones about being a labor-loving, Secularist, pro-choice, pro-gay, anti-war Lefty. It’s a worldview that informs everything we do, and every decision we make, from the place we choose to live to what we read, watch and listen to, and even to what we eat. You can believe that those Few who have money and power approach everything politically, and until the rest of us begin to do so as well, nothing will ever change. 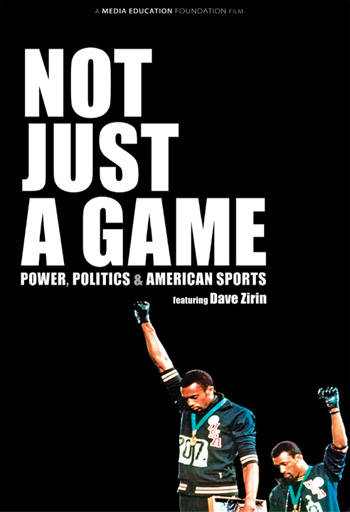 Dave Zirin realizes this as well. Zirin is sports editor at The Nation, and also the host of an XM radio show, columnist for other publications, and author of several books. He’s dedicated his career to the the coverage, study and understanding of sports. Zirin is nearly alone among sportswriters in comprehending that the games we watch and play inform every aspect of our social structure and interaction. From the ongoing NFL lockout to Luke Scott’s absurd love of guns and Orly Taitz, to whether your kid ends up playing basketball or lacrosse, politics is pervasive on every level of sports.

We say that Zirin is nearly alone in that world, because the increasingly-popular Deadspin will never hesitate to jump on a story with deep sociopolitical overtones. From Ben Roethlisberger’s alleged sexual misconduct to racism and gender bias on the PGA tour, Deadspin seems to understand that racism, sexism, homophobia and class warfare drives page views much harder than mere box scores. Zirin though is the polar opposite of Deadspin. Where the latter represents the worst in muckraking and questionable reporting reminiscent of the early days of the Hearst papers, Zirin is a sort of HL Mencken of the sports world, reminding us that the final score is irrelevant, not because we’re playing for fun, but because the only victories that matter are won away from the field of play.

Tonight the Red Emma’s collective will host Zirin at the 2640 Space for a Screening of Not Just a Game, which is based on his 2008 book A People’s History of Sports in the United States. The film explores the history of sport running head-to-head against politics in our culture, and Dave Zirin will be available for discussion and Questions afterward.

Even your mere attendance tonight is an overtly political act, as your $10 admission will go to benefit both the Baltimore Algebra Project and the United Workers, two local organizations which focus on social justice in Baltimore.