There’s no Sunday Night Football tonight. There’s no Sunday baseball game of the week either. Hell, there’s not even any new episodes of Mad Men, Boardwalk Empire, the Walking Dead, or any of the other premium TV fare the networks have started to crowd up Sunday Nights with.

When all else fails though, there’s still the punk rock underground. 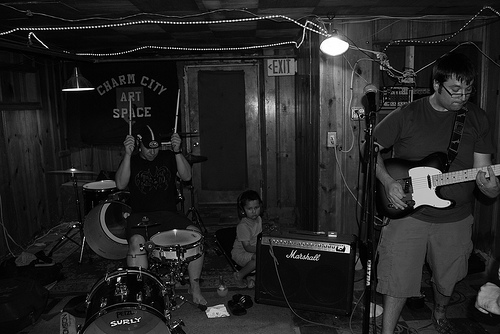 Tonight’s show at the Ottobar could easily be a basement show at someone’s house. With these three bands all playing for free in the upstairs, the basement show vibe should be very well in tact. The drop ceiling, crummy tiles, pool tables and day-glo artwork are all present and accounted for, but thankfully the bar is a little better stocked than pop’s dusty old liquor cabinet.

We’d love to tell you all about the bands, but that’s the thing about basement rock… those guys hide out in the basement and don’t generate a lot of news. The Quarantines play cartoonish horror-pop on Insubordination Records. The Matrimonials pop up to play grunge-punk only occasionally. Unfortunately, we missed their set the last time they played, so we’re eager to catch them tonight.

Perhaps the most elusive of these three acts though is South Carey. We’re racking our memory and the last time we saw them was…? It could be because they’re a true basement band through and through… the kind that has more fun at band practice than at shows. That’s not to disparage them though; they’ve got/Ace Freely/they’ve got Peter Criss/waiting there for them yes they do. there is one piece of news on them though; word on the street has it they’re no longer a 2-piece, but are now playing as a quartet with a sexy beast of a new singer and another dad-core bass player. Here’s hoping the change means they’ll play that much more often and rock that much harder.