It’s SPRING, Baltimore. You may be thinking that it’s not Spring, that it is in fact monsoon season, but we assure you that Spring has most positively sprung. Do you know what that means? Eh? Eh? Do you? It means that you need t-shirts. But not just any t-shirts will do. You don’t want to be shelling out good money to support some California pervert playing grabass with underlings, or buying a t-shirt which is not the thing that it is a t-shirt of.

No no. Not a bit of it. You want a one of a kind, thoughtfully designed, hand printed t-shirt made by a talented local artist and offered at a fair price. And that’s exactly what you’re going to find today at the Charm City Art Space. Marking the closing of the Rough Language show at the Hexagon, the goods from that show will be offered for sale around the corner at CCAS. We didn’t get a chance to see what was on offer over the last month, but from what we’ve heard just since we got home, it was pretty impressive, and worth your consideration when it goes up for sale today from 1 pm until 6 pm. 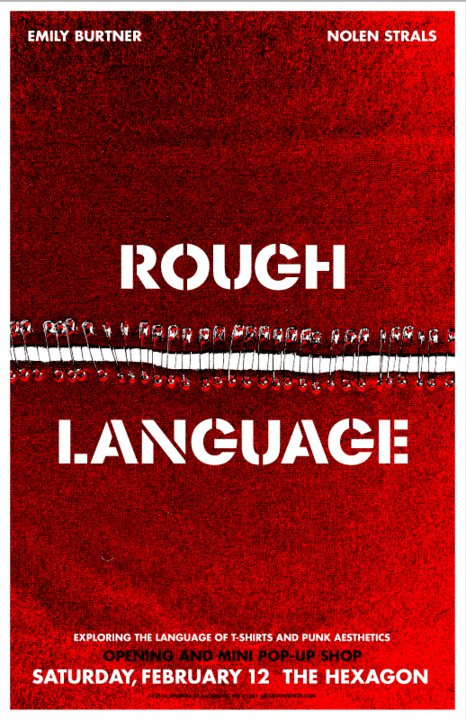 Goods from the Rough Language show go on sale at CCAS today. 1-6 pm

You might think you want to get there early for the best selection, but the smart money says roll in around 5:30 for maximum haggling advantage. You can spend the money you save on a nice round of drinks over at Joe Squared or Club Charles, and walk back around for the 7:00 show. And you will want to stay for the show.

We went to a show there featuring locals Pianos Become the Teeth shortly before we left, and at that time we took the attitude “Meh, let’s go around the corner and watch another band. These guys will play again soon.” Well, soon is now. They’re playing again and we’re not going to take them for granted this time. We’re going to watch them, because they are great at what they do and they deserve a great crowd listening.

Sharing the bill tonight is Connecticut’s Make Do and Mend, who just released their first proper full length this fall. We predict they’ve got a very bright future ahead of them selling songs to video game developers, web-based advertisers, minor filmmakers and the like. See them in a garage now, because in a few years you’re going to be saying “Oh, that band again. Hmm.” They’re on the right track by being on their way to this year’s South By Southwest, no? That’s not to say we approve or disapprove of their sound, it’s just what we see in our crystal ball.

Also sharing the stage tonight are Diamond, Balance and Composure, and Invitational. And you’re invited. See you there.