We’ve talked before on this blog about the Baltimore phenomenon we’ve taken to calling Awesome Saturday. The movers and shakers and event planners in this town who plan things in advance all seem to zero in on the last Saturday of the month to book the really cool stuff, and at least 3 great events will all happen at the exact same time. It’s usually the last Saturday, anyway. Sometimes it’s the third Saturday. This month, after Christmas and New Year’s and all, it’s both.

There are three shows going on tonight that are all worthy of your attention. We still don’t really know which one (or more) we’ll get to, so we’re going to tell you about all of them in a Just the facts, ma’am sort of way. 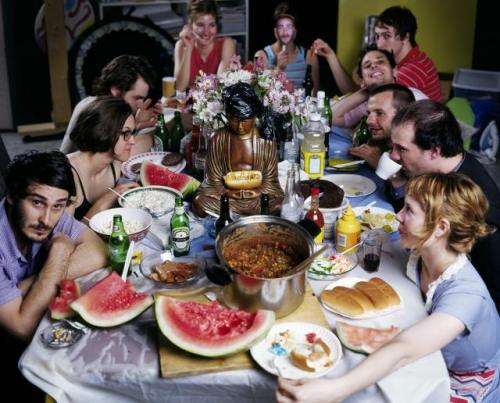 A visual approximation of Joan of Arc eating dinner at the Golden West.

The Sidebar is drawing first blood with 4:30 pm doors on a huge bill at Incest Fest, the general idea of which is a small-timore style crossover day of bands and friends sharing the stage in common bands and side projects. Highlights include the straight-out-the-garage rockabilly style of Young Jaguars and the one and only TUNNELBIKE!

Up at the Metro Gallery it’s gonna be Sick Sick Birds, who we talked about on Wednesday when they played with the Queers in DC. They’re playing with Squaaks, White Tiger and the Bed of Roses, and former Government Issue frontman John Stabb’s latest band Sleeper Agent, who were one of the subjects of our first post ever.

Finally, the Golden West in Hampden is hosting Joan of Arc. You would think that would be a no-brainer, since we love Joan of Arc and all the bands in tonight’s other shows are local, but they’re also playing Monday at the Black Cat, so there’s your second chance right there. Tonight’s show also features Philly’s Algernon Cadwallader, who’ve made a career out of sounding exactly like Cap’n Jazz, and Soft Circle.

Wherever you or we or any of us end up tonight, it’s bound to be an awesome Saturday.

Metro Gallery is at 1801 N. Charles Street in Station North.