As you may already know, the Chop is no stranger to matters of style. Classic American fashion is one of the cornerstones of this blog. So when we heard word of a new men’s shop opening in Hampden, you can believe it raised our eyebrows pretty high.

For too many years quality menswear in Baltimore has been strictly limited to the suit-and-tie crowd, and anyone wanting to look good outside of office hours has had to hump it out to the mall, and as we all know the mall can be a very uncomfortable place, like the back of a Volkswagen. 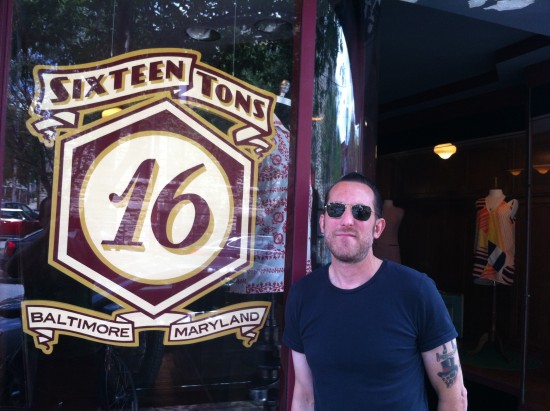 Daniel Wylie has been a busy man of late, curating goods, rebuilding his shop space from the ground up, and dealing with the myriad other concerns of getting a business together. Sixteen Tons had its soft opening about 2 weeks ago, and we can tell you firsthand, he’s done a hell of a job. The newest store on the Avenue looks great, and will have you looking great by the time you walk out the door.

Busy as he’s been, Daniel was kind enough to take a few minutes to talk to the Chop about his new shop, ideas on style, and how to keep the gentlemen of Baltimore Town looking their best.

Thanks for taking time out to talk to the Chop. With interior design, as well as with men’s fashion, the details can make or break your whole style. As we speak, you’ve got the doors open, but have still been laying on the finishing touches. How has it gone so far setting up shop?

I agree about the details. I was fortunate after much BS to get a truly unique building in Hampden, The Augusta Bank Building at 36th & Hickory [most recently Squidfire] and that to me is part of the battle as people are just drawn to it. They want to walk in and see what’s inside. The interior was pretty much just a room, raw space needing some serious attention. It hadn’t had much done to it in almost twenty years so I really had to start from scratch. There was nothing I could do that wouldn’t be a massive improvement on what was there. Some may say I went too far, but I really wanted to cultivate a distinct Sixteen Tons environment and experience that will hopefully compliment everything within it. The whole process has been grueling, lots of late nights and sore muscles. Fortunately, I had the Boh Man helping me. (He’s fucking useless really…)

Could you tell us a bit about your personal style, and how it may have evolved over time?

Having style and having

a style I think are different but obviously related; probably cousins. I’d like to think I’ve always had the latter and as I’ve grown (slightly!) older I am learning more about the former. As far as style I mean not so much the rules and regulations, but how and why certain things just look good on me. The terabytes of incredible information that are online have really been like an exhausting college course for me on the history of men’s clothing and everything associated with it .

Who or what do you think has had the most influence on your own wardrobe or style?

My personal style has probably evolved over time mostly on gut instinct. Though even through those years of ignorance I can now see that I was at least unconsciously drawn to certain things and people for specific reasons. Most of those had to do with a kind of effortless not-giving-a-fuck but looking sharp nonetheless; maybe studied but not labored. I would have to reference as a couple of personal touchstones Sammy Davis Jr. because the man just perpetually looked sharp and Paul Simonon. The whole Rudeboy/Rat Pack/Rockabilly thing I dig, its like the bastard offspring of Ike Turner and Gene Vincent in a Nudie Suit with steel capped Cuban Cuban-boots.

It sounds like you’re talking about the Italian idea of Sprezzatura. Baltimore is a city with 21st century ideals, but very rough edges. It seems that artful dishevelment and organic wear and tear should be as natural here as cowboy boots in Texas or Sandals in Key West. Any thoughts on that?

Sprezzatura is a new word to me, but absolutely spot on in definition. That is the black belt of fashion (life?) we should all aspire to.

Can you give us a teaser about some of what we can expect to find on the racks at 16 Tons?

Some outerwear, some knits, some shirts, some no bullshit selvedge denim, definitely some labels new to Baltimore.

Locally exclusive labels, you say? That’s interesting. Care to tease us with some examples?

Pretty positive that I’m the only one in Baltimore with Farah Vintage, Universal Works, Naked and Famous Jeans, Artifacts and SkunkFunk (who I probably won’t have again after this winter), and possibly Revolution Now, Field Notes and more.

That’s some quality stuff. Many men might cringe at the term “boutique” but 16 Tons is at least what you might call a “specialty shop”. What advantages for the customer does this style of shopping have over, say, a Macy’s or a
Sears?

I just have to believe that most men loathe malls as much as I do. I’ve always preferred a more comfortable, interesting environment that has a unique personality to 2500 sq ft of racks of whatever. And it’s less complicated in the sense that if you like what the store is doing, its style or whatever, then it saves you having to hunt it down yourself. Also, I think the increased awareness of supporting smaller, local, independent businesses overrides any discomfort of what that business might be listed under in the yellow pages.

You’ve made it clear that 16 Tons is striving for Timeless or Classic style, but what does that mean to you exactly? It seems that there’s a very fine line between timeless and Old Fashioned, and many fashionable men unwittingly cross it when trying to smarten up. I’m thinking specifically of certain NY/Brooklyn or Jack White types who’ve run the slippery slope from fashion into age-inappropriate mustaches, hats, suspenders, etc. and end up looking like an anachronism.

I think that the standards, the basic building block items of a man’s wardrobe, design wise, say since the beginning of the 20th century, can and have only been improved on so much. Pants are pants, two legs forever. A well cut, well fitting suit just looks good, forever. This is more or less why certain elements never go away, because they’ll never look bad. All the extremes or aesthetic details of different styles or eras are just that, styles, that come and go. A man will always look sharp in a nice hat but you can’t really say that about a dude in spats.

Speaking of going back in time, these days it can be tough to have a conversation about menswear without at least one or two Mad Men references being thrown around. Is this a blessing, a mixed blessing, or a curse?

I’ve never watched it, but I’m familiar with the reference. I don’t think that anything that encourages men to wear clothes that fit them and not be afraid to look sharp can be a curse. It just depends on how it filters out into the public, good examples to learn something from and apply to daily dressing or a bunch of guys in period costume.”

In terms of fashion, what, if anything, sets Baltimore apart from any other east coast city?

If my memory serves me correctly, it was the Baltimore market that single-handedly kept the Nike Air Force 1 in production, amazing if you think about it. Besides that bit of minutiae and maybe the Deaconites antifashion/fashion of a few years back, I can’t think of anything that our humble city has that makes it unique, clothing wise that is.

Finally, if you had to pick, what one thing should every man have in his closet?

Thanks again, Daniel. We can’t wait for the chance to blow some of our post- Christmas gift cash in the shop, and get to be looking right for New Years’ Eve. Of course, we may not have to now that you’ve got gift certificates available. Let’s be honest, Baltimore. A 16 Tons gift cert makes a much better last minute gift for the man in your life than that same old bottle of booze.