We’re forgoing any Christmas decorations this year. Call it an austerity measure. Call it Grinching. Call it (most accurately) laziness. With the amount of traveling we do every year, and not knowing when we’ll next be home for the holidays, it didn’t seem prudent to invest time, effort and money in decorations that may not see the house-front again for another 3 or 4 years, especially with no wife or children to share in their enjoyment.

With Christmas just 10 days away, we’re guessing that everyone who’s going to decorate already has, so we may be a bit late with this, but we’re certainly not too late to judge the good, the bad, and the ugly as far as Christmas lights in Baltimore go.

We’ve noticed that the vast majority of inner-city rowhouse dwellers are disinclined to decorate at all, and most will only bother with a tree if there’s a Santa-aged kid in the house. It pains us to admit that the County’s got it all over us as far as decorating goes, but no matter which side of the city line you’re on, you can’t go wrong if you’ll follow our advice to the letter. 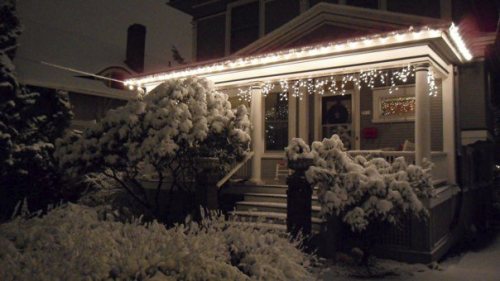 This house on Peacock Lane in Portland is a masterpiece of taste and understatement. It's warm, welcoming, and wonderful.

Do: Use white lights. When you light your house, the idea is to show off the house not the lighting itself. Colored lights have a way of clashing with each other, and with the features of most houses. With white lights, it’s nearly impossible to go wrong. They can be accented with small strands of red or green lights if you’re really craving a little color, but white effects the soft, warm glow that makes a home look most inviting in the dead of winter.

Do: Work with the symmetry of your house. If you’re going to light up the door, be sure to light up the full length window next to it. Any architectural features like gables or overhangs should be lit, otherwise you run the risk of an incomplete aesthetic. If you have an attached garage, that should be treated as part of the house as well.

Do: Understand that less is more. Resist the urge to compete with your neighbors or add just one more ‘finishing touch.’ Too many lights, wreaths, bows, etc. can go from festive to cluttered very quickly.

Do: Take note of what your neighbors and others are doing. If someone with a house style similar to yours gets it right, don’t be afraid to borrow some of their ideas. Just because you’ve always done it some specific way, doesn’t mean you can’t try something new this year.

Do: Place your tree in the front window. This isn’t mandatory, of course. Some people will want to set up their tree in a non-fronting room. If you’ve got the room and the right windows (bay windows, picture windows) placing the tree at the window will serve to bring the inside out a bit and make the whole effect that much more unified, cozy, and inviting. 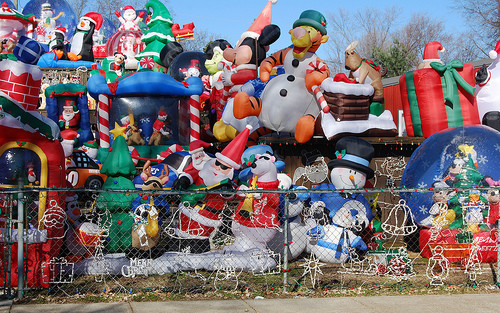 Yes, there is actually someone's house under there.

Don’t: Buy any of those giant inflatable snowmen. Just look at the picture. Even with only one of those, your house is a considerable fraction of being that ugly. All those inflatables that light from the inside and require you to run an air compressor half the night are always, always, always tacky. The first Clark Griswold who ever bought one of those probably thought he was pretty clever, but now that Wal-Mart is moving them by the truckload in every town in America they look more ridiculous than ever.

Don’t:Put a bunch of wire statues all over the yard. All those little deer skeletons are junky and trite. One look at them and all we can think is “Welp, that’ll be in a landfill somewhere sooner or later.” That’s not the thought you want in your head at Christmas time. Also, along the same lines, we’d like to mention that we fully endorse natural wreaths and trees.

Don’t:Light deciduous trees. If you’ve got an evergreen, go ahead and light that. Most types of bushes and shrubs are good for lighting as well. Once they lose their leaves though, deciduous trees look dead and have no symmetry. Lights tend to look more like they’re tangled than neatly strung.

Finally Don’t: String all purple lights and football decorations. Christmas is supposed to be about the little baby Jesus. It’s not about the little baby Ray Lewis. Harbaugh, Reed, and Flacco are not the three wise men. The Yinzers in Pittsburgh may have a memorabilia-based economy, but as Baltimoreans, this kind of thing is beneath our dignity.