You don’t need us to tell you about the food at Bluegrass. There are already plenty of reviews out there in the Sun, The Citypaper, Baltimore Magazine and elsewhere. Baltimore is very much a city in which restaurants are their reputations, and when a place like Bluegrass opens up, everyone seemingly wants to be the first one in, and the first one to make that reputation. We’re not just talking about newspapers and magazines, but also about sites like Yelp and Chowhoud, which tend to fill up with very strong opinions from self-appointed experts soon after any decent restaurant opens its doors.

We like to eat as much as the next guy, and even more than that we like to cook, and manage to stay busy enough in the kitchen here at the Chophouse. One thing we don’t like to do though is to write about food. This is not a food blog, and never will be. We’ve already gone on a rant about foodies, and it wasn’t until we checked out Bluegrass’ website and found this little gem that we realized we weren’t alone in our opinions. (Click that link. It’s very much worth your time to read.)

We’re here to tell you that Bluegrass has a bar. 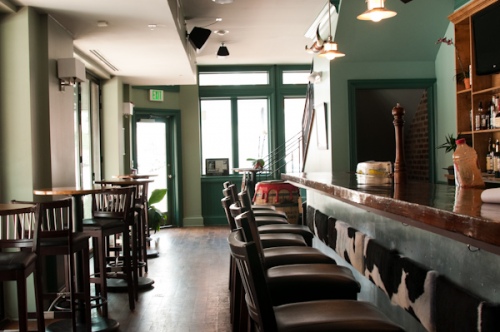 We’re here to tell you that Bluegrass has an excellent bar. With its modest portion sizes Bluegrass has become the kind of place that is becoming increasingly popular in Baltimore; the sort where people go to eat a little and drink a lot. To our mind, if the cocktails are the main attraction, then why even bother with the menu?

Thanks to a bit of architectural foresight, the space’s two dining rooms (upstairs and in the rear) as well as the kitchen (in the basement) are well secluded from the bar. It may technically be a restaurant bar, but it feels very much like an updated version of the South Baltimore corner bar that it is. Being on its own, the intimate bar space is left entirely to take on the mood and feeling of whatever patrons happen to inhabit it at any given moment, which should be the way with all great bars.

But the patrons themselves can only do so much. It’s up to the bartender to do the rest, and with their formidable selection of Bourbons Bluegrass does a fine job of holding up their end of the bargain. Throw in 6 regularly rotating taps, a good selection of bottles, occasional firkin nights, and some purely professional bartenders who pour ‘em strong, and you’ve got a recipe for a truly great bar.

It’s one that we’ll be back to whenever we’re down that way, and perhaps even when we’re not. Some say Bluegrass is a destination restaurant, but for us it’s a destination bar.