For all the complaining we’ve done recently about old bands dragging their carcasses around the country on tours trying to relive their glory days and pay their rent, you’d think we’d be staying as far away from Sonar tonight as possible. To the contrary though… the Chop will be all up in there.

You shouldn’t need the Chop to tell you who D.R.I is. The band that first brought punk and metal together and pretty much invented the circle pit once held a Guinness record for being the fastest band in the world. The way we’ve got it figured, even if they have slowed down with age, they’re still pretty damn fast. Perhaps this is an inherent advantage that speed metal has over punk rock; with its intense focus on musicianship, it holds up better with age, and is usually much more interesting to see live than to hear recorded. With most of their catalog clocking in at or below 2 minutes, the Dirty Rotten Imbeciles have little choice but to stay fast. 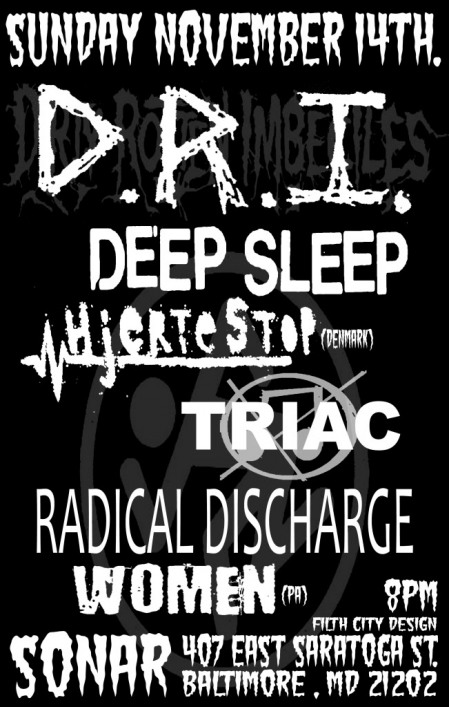 In fact, it’s entirely possible that on a six band bill, there may be exactly zero songs hitting that 2 minute mark. As a grumpy old man, we usually balk hard at six band bills. We just haven’t got the patience for that kind of thing anymore. We’ve got a feeling that time is going to fly at this show though. If there was ever a bill where bands might seem to be racing each other to see who can finish a set in the shortest amount of time, this might be it.

Local mainstays Deep Sleep and Triac pair up for support with the new, new, super brand new Radical Discharge, who are, you know… new.

Also lined up tonight is Philly’s Women, who are neither women, nor Canadian but are pretty awesome, and Denmark’s Hjertestop, who sound more Like Los Angeles than Copenhagen (and we mean that in a very good way).

That lineup is so solid that we’d show up even without D.R.I. on the bill. These bands might just make our head explode before the headliner even hits the stage. And we’ll have had our money’s worth too. When you consider the very reasonable $12 advance ticket price and the fact that it’s Sunday, how could you not want to come out for this?