Updated: Secret Mountains is a last minute cancellation on this bill. They are being replaced by Hermit Thrushes.

Philly has been demanding more and more attention lately, and while they’re putting out acts like Dangerous Ponies and the Extraordinaires, it’s not difficult to see why. Being friends and labelmates on Punk Rock Payroll, these two often share the stage, as well as sharing a fun, upbeat-yet-stripped down garage-pop sound reminiscent of the Black Lips, Jay Reatard, and the Vivian Girls. 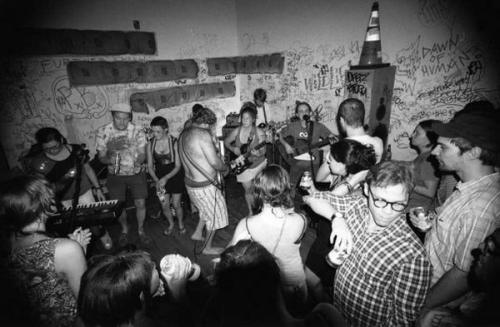 There’s not even a proper name for this sort of sub-genre, as ‘garage pop’ falls quite short for what these bands actually play, but whatever you want to call it, it’s a blast to listen to. These are the sort of bands that are happiest when they’re up on stage, to the point of being ecstatic, and remind you that they’re making music because it’s fun to make music.

While Dangerous Ponies and the Extraordinaires may be two sides of the same coin, Baltimore’s Secret Mountains is something different entirely. Don’t get us wrong; they’re plenty of fun to watch, but not quite in the same way. With a sound more reminiscent of Mazzy Star or Feist, Secret Mountains are enjoyable to see because you know you’re in on the ground floor, and watching one of this decade’s most talented bands before anyone else knows about them. Hearing these intricate melodies and full-bodied rhythms on the stage of a club or a DIY space is kind of akin to watching Brooks Robinson field grounders in Arkansas amateur ball… the talent is immediately obvious and overwhelming, and it goes without saying that this band’s star is going to be on the rise for many years to come.

You know what else is a whole lot of fun? Voting for the Chop in the Sun’s Mobbies Contest, that’s what. There are only 3 days left to vote, and you can vote for us in 3 categories, Music/Nightlife, Misfits, and Personal. We’re going to need you to go vote right now since time is growing shorter and sadly, our trailing margin is not.