After a few fits and starts, it’s about to turn genuinely cold and gray here in Baltimore. Leaves are falling, rain is falling, and soon enough there may even be snow falling. Add that to the year-round hazards that pedestrians encounter on Charm City’s streets (glass, chicken bones, strip club flyers), and it’s clear that your stylish summer shoes just aren’t going to cut it anymore.

You need a pair of boots, Baltimore. But maybe you’re afraid to pull the trigger? You want something you could shovel a few inches of snow in, if it came to that, but they’ve also got to serve for everyday wear. Hell, you might even want to throw them on under a suit for the odd holiday party that’s bound to pop up. Clearly, not just any boots will do.

And you probably don’t want to spend a fortune either. Don’t worry, the Chop’s got you covered. We’ve scoured the net and narrowed it down to half a dozen solid choices, all of which are high on style, suited for winter wear, and at or below $200. It’s hard to go wrong with a basic black Chelsea boot, but when you want to step it up a bit, you might consider one of the following options:

We’ve got kind of a love/hate relationship with zappos. You’ve got to look through a lot of crap to find anything that looks good, but once you do, it looks like this. These Fratelli’s are unconventional in a lot of ways. They’ve got buckles, which we’re not usually a fan of, they’re cut low on the ankle for what they are, and they’re blue (but available in 3 other colors). Somehow they pull it all together though. They may not be the ideal choice for everyday wear, but they’re definitely going to stand out. $99 at Zappos.com 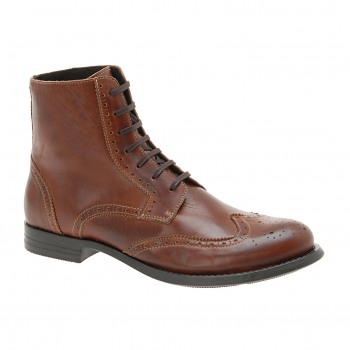 Wingtip boots are having a moment right now, and we’re all for it. Make sure you’ve got the stones to pull these off though, because they’ll be in your closet for years to come. Don’t worry about it; they’re definitely going to wear well with age, and after your first winter in them they’re going to look a lot less dandy and a lot more pedigreed, which is as it should be. $150 at Aldo 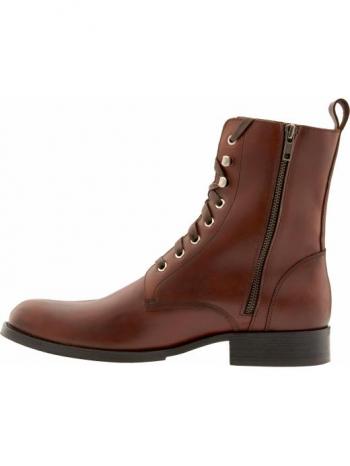 The Denver Boot: $160 at Banana Republic

We’ve got a soft spot for Banana Republic, and when they offer things like these boots, it’s not hard to see why. Their Denver boot is tough enough for most anything, and genteel enough for a garden party. Swap out cleats for the uppermost eyelets and hide a zipper inside the ankle, and they’ll even kick off easily if you happen to be lucky enough to escort someone home from said garden party. Now that’s good design. $160 at Banana Republic 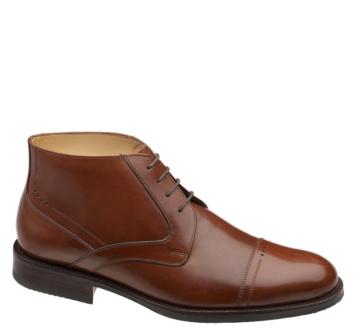 Perhaps you like the wingtip boots above but you’re not ready to commit to the style? A cap toed boot provides a nice middle ground. It’s every bit as classic, but not quite as ostentatious. Once you’ve outgrown your floppy old chukka boots, you may be ready for their grown up alternative. These particular boots are also refurbishable, which few shoes are nowadays (and even fewer under $200) So if you like them, you can literally keep them forever. $185 at Johnston and Murphy

If you’re planning to actually work in these boots (whether in the backyard or at an actual job), Then Frye’s got the boot for you. An American company with all the heritage and quality of a Red Wing or Carhartt, Frye’s Arkansas boots are a pretty rare find: a genuine, bona fide work boot that actually looks good enough to wear out on the town. They’re even made right here in the good old US of A. $198 at Macy’s.

If Frye is something of a throwback, then perhaps Bed Stu is what we can get used to in the 21st century. A lot of talk about humble roots and honest work and good design and quality materials, from a bunch of Brooklyn hipsters who design in some charming old salvaged warehouse building in Bedford-Stuyvesant, but send those designs overseas to be produced and shipped back. Pair them up with an established national high end retailer who wants to foster something of an ‘artisan’ or ’boutique’ feel, and you’ve got fashion’s dominant business model moving forward. This may or may not be an overly jaded view, so we’ll put it aside and look at the boots themselves.

Yeah. Those are pretty fucking nice boots. $200 at Nordstrom’s

There are no fashion or style categories in the Baltimore Sun’s Mobbies Contest, so you’re just going to have to vote for the Chop in those categories where we are nominated, namely Music/Nightlife, Personal, and Misfits. We’ve been holding our own thus far, but we’re going to need a hand if we want to crack one of those top spots. Head over there and vote now. We’d be much obliged.