We’re going to let you in on a little secret of etiquette, Baltimore. When an invitation says something is optional, that thing is damn well mandatory. A good host or hostess will be reluctant to push their guests around, even on paper. There are firm conventions in place though, and if you’re planning to attend a party or event that is ‘black tie optional’ and ‘gifts optional’, you had better show up in a tux with a nicely wrapped gift. You’ll look like a boorish clod if you don’t.

The same is true of ‘costume optional’ Halloween parties, whether they are a private affair or being held at a bar or some sort of festival. Halloween is now less than 2 weeks away, and if you’re still lacking a costume or are dropped a last minute invitation to a ‘costume optional’ party, you’ve got your work cut out for you. 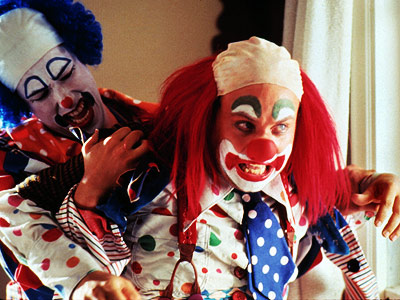 Fortunately, the Chop is here to help. We’re happy to give you five solid costume ideas which can be assembled with a minimum of effort and expense, and which can easily be shed when the party ends, or if your plans include something that does not require a costume.

5. Priest The priest outfit is really nothing but black on black with a little white cardboard collar. You probably own most of it already. It can be good fun to do the priest schtick too: blessing people, taking confessions from ‘naughty schoolgirl’ costumers, and breaking out your crucifix or holy water to ward off anyone who may be dressed as a devil. Plus, people like the irony of seeing a priest get totally faced on hard liquor.

4. Fisherman Think fishsticks. This guy has the right idea, and he’s really selling it with the beard. If you forgo the beard, you can accessorize with a little green netting or manila rope. Yellow foul weather gear is available cheaply at places like Lowe’s and Home Depot, and of course, you can wear normal clothes underneath.

3. A Mexican Is this racist? Yeah. Probably. A little. But if you dressed in lederhosen or a kilt, no one would say boo, so why not. Besides, you can claim the moral high ground by claiming to be the (Colombian) coffee man Juan Valdez, or just by yelling “Do I look illegal?!?!?” directly into the face of anyone who questions you. A sombrero, a poncho, and a fake mustache and you’re pretty much good to go.

2. The Sheet It’s old hat on TV and in the movies, but you actually see very few people rocking the sheet-ghost costume. It’s the easiest thing in the world and good for a laugh every time. A sheet will also double as a toga with very little modification, so it’s basically 2 costumes in one. Why not?

1. Clown Okay, so a clown may not really be that easy. Makeup is kind of a commitment. Wig, shoes, gags; a lot goes into being a proper clown. We believe that the return is worth it though. Don’t underestimate the scariness of a clown outfit. More people than you think are totally freaked out by clowns. Besides, clowns are never so funny and awesome as when they’re out of context. Drinking heavily, making lewd remarks, and threatening violence are what takes the ordinary clown costume above and beyond all others. If we see you out on Halloween and you’re a clown, we’re totally going to buy you a drink.

Stay tuned for tomorrow’s post, in which we’ll be discussing the dumbest costume trend ideas of 2010. Don’t say you weren’t warned.