Apparently we’re very late to the party on this one, but what can you do? It’s better to find out about some amazing open secret like Real Food Farm a little late than never, don’t you agree?

It’s no secret at all that Baltimore is among the cities on the leading edge of urban agriculture in the US, and since its establishment last year Real Food Farm has been at the epicenter of Charm City’s urban ag movement. Their stated goal is to produce no less than 10% of all the food consumed in Baltimore City. It’s a lofty aspiration, to be sure, but who’s going to say they can’t? You? Certainly not us. 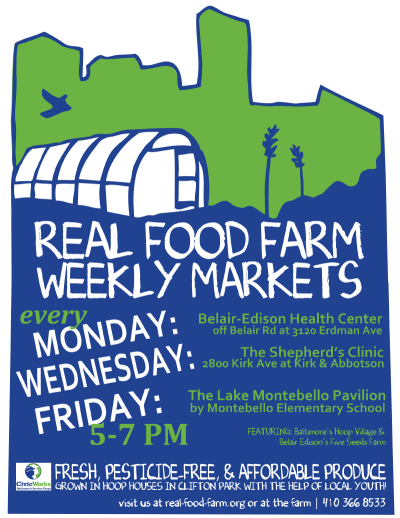 A lot more productive than playing Farmville on Facebook, don't you think?

There are a lot of buzzwords flying around the food scene’s lexicon lately, but of all of these catchy terms like organic, sustainable, and biodynamic, none of them will be more important in the coming years than this one: local.

And you literally can’t get any more local than RFF, which grows all of its produce on a plot right here in Clifton Park, along with a little help from the Civic Works and some Baltimore City school students.

In our humble opinion though, where RFF goes really right is in their market schedule. The Chop does not generally favor waking up weekend mornings at the crack of dawn to buy vegetables. And if you miss that damn Waverly Market on Saturday, you have to wait a whole week for it to come around again.

As you can see above, RFF markets are from 5-7 in the evening, which is much more convenient, and there are not less than three market days each week, all of which are convenient to residents of North Baltimore.

So we’re going to head over to Belair Edison today and sustain a little agriculture. Maybe even find some good ingredients for vegan chili, since it’s getting to be that time of year.

Real Food Farm markets take place Mondays at Belair Rd. and Erdman, Wednesdays at Kirk Ave. and Abbotston, and Fridays at Montebello Elementary (next to the lake). See real-food-farm.org for more information.