When the young thespians behind Single Carrot Theater decided to find themselves a home they searched far and wide before settling on Charm City. It goes without saying that we think they’ve chosen wisely, and their arrival here has illustrated something that we often say about Baltimore: it’s probably a crummy place to visit but it’s a wonderful place to live. That’s true not only for people, but for theater productions as well. While many touring productions that come through are artistically questionable and barely profitable (looking at you, Hippodrome), local productions are consistently interesting and unique. 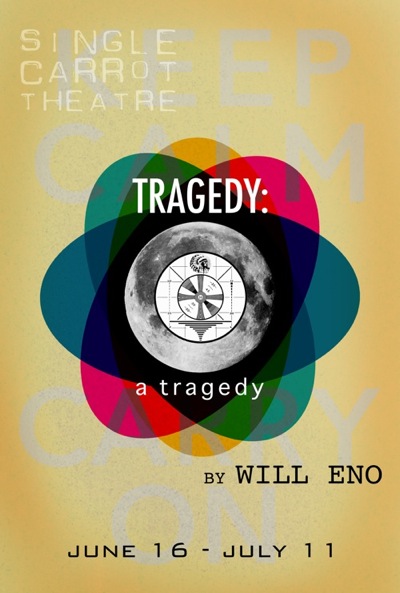 That’s as true at SCT as anywhere. Baltimore is certainly a city of niches, and the Carrot has found theirs and settled into it quite well. They’ve quickly become a cornerstone of the Station North neighborhood and have been winning awards and new fans at such a consistent rate that it’s almost hard to imagine when there wasn’t a Single Carrot. That’s how naturally they fit into Baltimore’s cultural landscape.

Tonight’s sold-out show marks the official opening of Will Eno’s Tragedy: a Tragedy (with sneak previews having been staged this week). The New York Times famously called Eno a “Samuel Beckett for the Jon Stewart generation.” While the Chop doesn’t pretend to know too much about theater, we do pretend to know about news. Or fake news. Or news that is dumb enough to be fake. We watch plenty of it anyway; like watching Tony Hayward on the Hill as we type this avoiding questions about an actual tragedy, and let us tell you, it is certainly tragically absurd. So we’re excited to see art imitate life on stage tonight… and more than a little scared that life will out-ridicule the ridiculous.

We’d love a chance to get to the theater more often, and to cover it in this space. It seems to us though that it’s generally not the sort of event to which you drag all your old punk-rock buddies, and it would be awkward to go alone. To us the stage is best appreciated with a date. Not just any date will make a great theater date though. She’s got to like theater of course, as well as being all-around wonderful and someone we’d want to see a lot more of. Lucky for us, we found a great theater date for tonight.