So we find ourselves in the thick of Memorial Day Weekend, and those of you that aren’t at the beach are probably spending today at some sort of cookout, potluck, garden party or other social event. In the spirit of the season, we’d like to humbly suggest you forgo the cheapie bottle of Australian Sauvignon Blanc and instead swing by Hopkins Deli for a more potent and memorable hostess gift; a bottle of Chartreuse.

As you already know, the Chop loves a classic cocktail. Unfortunately, we’re not big on gin, and very picky about rum (and not snobby picky… we like Bacardi). So when spring and summer roll around and it’s time to lighten up with the brown liquor, we find ourselves drinking too many things that taste like lemons and limes.

How can we add a little more flavor and still keep the vodka gimlet a crisp, refreshing, warm weather drink? The answer was simpler than we thought. 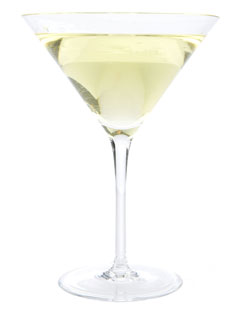 The Chartreuse gimlet will look similar to a traditional gimlet or daquiri.

This one’s another Baltimore Chop original as near as we can tell, and it took us a lot more tweaking than we thought it would. We’ve got a sweet tooth, so we started out by adding simple syrup, which was a mistake. The Chartreuse and citrus are sweet enough as-is, and you may even want to add a dash of bitters if it suits your taste.

Matters were also complicated by the fact that not all bars carry Chartreuse, although they probably should. A special hat tip is in order to Bad Decisions who not only carries green and yellow Chartreuse, but has a citrus press juicer behind the bar.

Juice of half a lime

It’s as simple as that. Shake, strain, and enjoy. Its got all the complexity of flavor you’d want in a gin gimlet, without the bitter, medicinal juniper taste of gin. As we said, you might like to add bitters, and if you do, we recommend Fee Brothers’ Grapefruit Bitters which will add a new note of complexity to the drink, without altering the flavor drastically. You can also try the green variety of Chartreuse, although in our experience the yellow is much more enjoyable in this cocktail.

A new twist to an old classic, a pitcher of these at today’s function will insure that everyone has a great weekend, and that no one actually remembers it.