We’ve noticed something peculiar these last few months. Here at the Baltimore Chop, we keep track of local happenings and events pretty closely, and it seems to us that a pattern is beginning to emerge. Much as each week has a social ebb and flow to it, so do the months. And for the last few months, the final Saturday of the month has been Awesome Saturday.

It’s starting to feel like planners, promoters and party-people are all looking at their calendars in advance and zeroing in on Awesome Saturday as the date to schedule their event. We often find ourselves hard pressed to decide what to do on Awesome Saturdays. 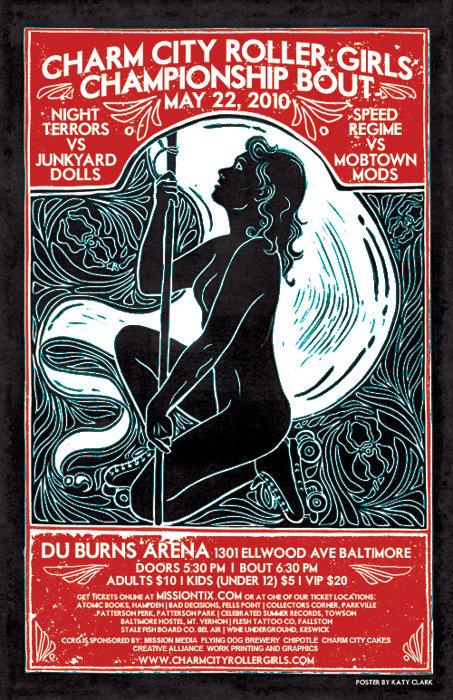 A lot of that has to do with the Charm City Roller Girls, who routinely hold bouts on the final Saturday of the month. We’re always grateful that CCRG opens the doors at DuBurns nice and early, since it leaves us (and them) plenty of time for post-game raging.

We never quite understood why people don’t like showing up for things until 11pm or later. We’ve always been of the opinion that if you’re out to have fun, more time= more fun. So listen Choppers… get there early. You’re clearly not working on Saturday, so get yourself down to DuBurns and grab a PBR before the sun goes down. Tonight is the final final Saturday for a while. It’s the league championship bout, and the last chance you’ll have to see derby until July 24, when Charm City takes on Denver at home. Tonight also determines who’s awarded the prestigious and much sought-after Donaghy Cup. We don’t know all the details, but we like to imagine that it’s part Stanley Cup and part pimp cup… something you can take turns dragging to bars around town and drinking beer out of.

What else is so awesome about Awesome Saturday? Glad you asked.

In addition to the Innovate Love Art Auction that we mentioned yesterday, which is probably sold-out anyway, you could go see Matt Porterfield Speak at the Catonsville Library. Porterfield has enjoyed much acclaim recently for his film Putty Hill as well as setting the blogs on fire with the new Double Dagger No Allies video he directed.

If you’re in the mood for dinner and a movie you can check out the Slideluck Potshow at H & H’s Gallery Four. It’s bound to be a veritable bohemian bacchanalia and worth checking out.

Musically speaking you can keep it calmed-down tonight with Wrens at Sonar, step it up a notch with Loved Ones, Dead Mechanical and the Desert Boys at Golden West or get goofy and thoroughly rage with Pfisters and Davey G at the Windup Space.

If you’re not having an Awesome Saturday it’s your own fault, Baltimore.