Wow. We had such a good time yesterday walking around Flowermart looking for plants, looking at girls and mixing up Lemon Sticks, that we’re totally sold on the whole buy-locally-from-an-open-air-market idea. And it looks like we’re in luck again, because there’s no shortage of them today.

In addition to the Waverly Farmers’ Market which we get to as often as hangovers allow, we’re also going to check out the Really Really Free Market at 33rd and Guilford which is running concurrent today from 7 am to 1 pm. RRFM is a nationwide progressive movement started by San Francisco pinkos. You ought to know by now that if there’s one thing the Chop can get behind, it’s nationwide progressive movements started by SF pinkos. This one appears to be made up locally of Hopkins students, and their parents buy them nice things, so we’re looking to score. 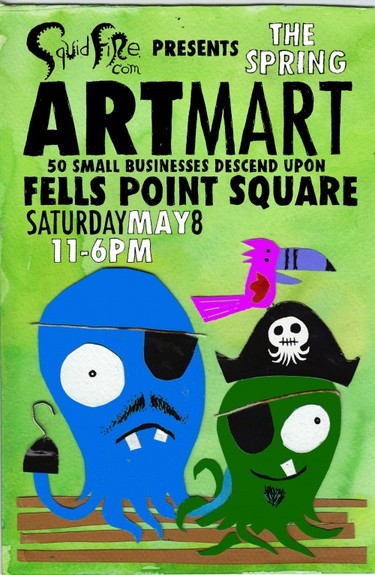 But wait… there’s more! Just in case leftover Ikea lamps and obsolete televisions don’t satiate our hoarding appetite, we’re going down to Fell’s to check out Squidfire’s 10th Art Mart. Art Mart gets bigger and more successful with each installment and this time around it will feature over 50 artists and crafters and run from 11-6, rain or shine.

Odds are you’re probably aware of the huge DIY arts and crafts scene here in the city, but have only seen scattered examples of it around town or online. Art Mart is a great chance to take it all in at once and see what’s available in the world of handmade goods.

It’s a great feeling when someone says “Oh my God, that’s awesome! Where did you get that?”, and it feels even better to say “Its one of a kind. I got it at Art Mart.”