What’s that Baltimore? You hate Mondays and you worked really hard all day and those reports are due and that meeting was a snoozer and the intern is incompetent and all you want to do is flop down on the couch and eat chocolate Cheerios for dinner and pass out?

Well, forget it. The Chop has plans for you today. 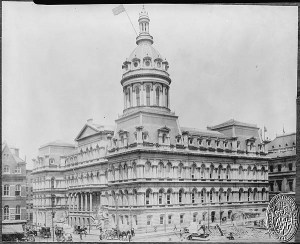 Today, as soon as you get out of work, you’re heading straight down to City Hall to attend the Bmore Local coming out party/ meeting and rally at City Hall, as mentioned in the Mobtown Shank blog late last week. Today’s rally is a direct response to councilwoman Belinda Conaway’s plan to introduce the PUD for the 25th Street Station project, including a 24 hour Wal-Mart.

We can’t say we know too much about Bmore Local as yet, but the Chop definitely aims to show up and find out what they’re about. We’re really hoping this is the larger citywide Wal-Mart opposition we’ve been waiting for.

For more on the Wal-Mart proposal, be sure to check out the Shank as well as the Baltidome Blog.

The good news is that after you sit through most of a boring council meeting, you get to head up Calvert Street to Centerstage for this month’s installment of the Stoop Storytelling Series. You can even get your tickets now to save time and avoid a sellout. Tonight’s topic is ‘Behind the Muse”, in which artists and creative types give their take on the creative process.