Yep. We did crap out yesterday. Watched cartoons and did laundry and built bookshelves. A typical Sunday, we suppose. And its a good thing too, cause now we’re all rested up and ready to have our ears exploded.

That’s right kids… back to the Ottobar tonight for Darkest Hour and Dillinger Escape Plan. 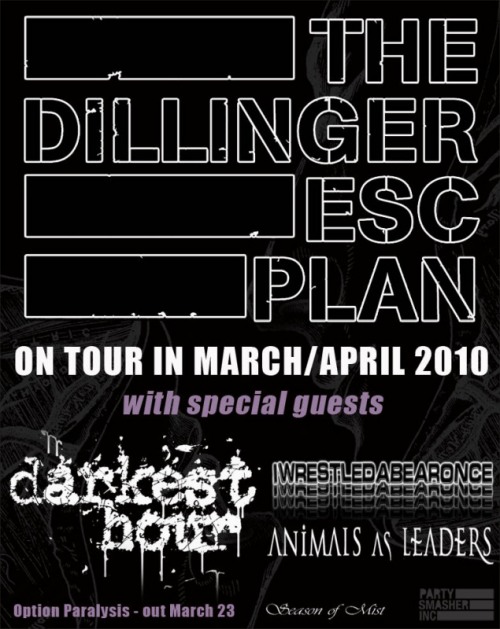 The Chop doesn’t usually go for metal. In fact, we’ve gone on record plenty of times as saying that Anthrax is the only metal band that matters, and while we stand by that, we still heartily recommend this show.

DC’s Darkest Hour has always been one of those bands that plays fast enough and melodically enough to attract metalheads and hardcore kids in equal numbers. They must be a hardcore band, cause they were on Victory. They must be a metal band, cause they have a song in Guitar Hero 5. Every time we’ve seen them in the past it hasn’t mattered much. They’ve delivered sets that almost force you to rock out like Beavis on Dust-Off.

Dillinger Escape Plan is the perfect second head to this hydra. Where Darkest Hour fits in hardcore influences, DEP alloys it’s metal with a mathy post-hardcore style. Both of these bands have developed fiercely loyal cult followings since the mid 90′s, and by the time they’re done, both will have carved out an important and permanent place in the history of American Metal.

Advance tickets for the show tonight are $18. If you’re a fan of both these bands, that should seem like a bargain. If you’re more of a casual fan, it is a bit pricey, but at the very least you can offset the cost with Metal Monday at the upstairs bar. Every Monday is $9 all you can drink rail and select beers. Last time we were there, the metal wasn’t too loud, and the select beers included Sam Adams, which can easily be $4.50 each at other places.

Also participating in tonight’s you got metal in my peanut butter festivities are Louisiana’s iwrestledabearonce and the very Orwellian named Animals as Leaders. Doors at 7, show at 7:30. You can even go to work on time on Tuesday morning.