Here it is… We’re disappointed that there still seems to be no on-the-ground citywide organizing effort to stop the WalMart PUD, even though it’s already been shown that there is citywide interest in such organizing, as demonstrated on Facebook.

After the somewhat embarassing confusion of March 9th in Remington, we decided to do a little actual homework like a grown-up blogger for a change. 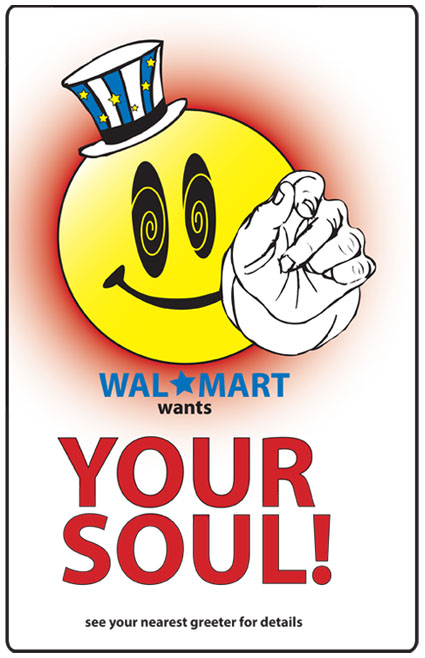 So we sent an email to the Charles Village Civic Association yesterday stating in plain terms that we live near Charles Village, and are specifically interested in stopping WalMart, and asked if it would be worth our while to attend tonight’s meeting.

The prompt and courteous reply we received was short, but indicated that all are welcome. So if you have any interest at all in stopping WalMart from extending it’s insidious tentacles into Remington, we encourage you to come out tonight. The Meeting is at Ss. Philip and James Church at 2801 North Charles St. (map), and starts at 7:20 pm.

We realize this is in direct conflict with tonight’s Drinking Liberally meeting, so you’ll just have to decide what sort of progressive you are. Or run really fast from one to the other, like we’re tempted to do.

If you’ve not yet signed the online petition against WalMart, you can sign it here.