The Chop doesn’t particularly like March Madness. While we suppose it’s better than the whole crooked-corporate-BCS system, we just can’t bring ourselves to care much about college basketball.

We do however like springtime. And friends. And beer in red plastic cups and front porches and backyards and nachos, veggie platters, and pizzas. So we’re going to be spending the better part of today at a March Madness themed party… officially mourning the loss of the Morgan State Bears, and unofficially spending most of the day talking about Sarasota and Opening Day.

This story has a happy ending though, because after a full day of listening to people pretend to be experts in, or even care about basketball, we get to go to a place where no one cares about sports and fill our head with the noise we want to hear: Squaaks! 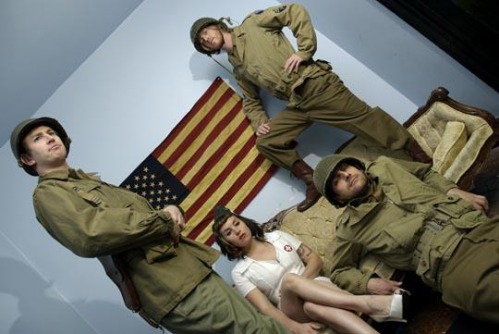 Squaaks turn the Metro Gallery into their own personal garage tonight along with The Courtesy Line and A Cat Called Cricket.

For the unfamiliar, the band often likens itself to acts like T-Rex, the Kinks, and the Beatles, and we say they’re not far off in that description (Okay… maybe they’re no Beatles, but whatever.) The band also features Elena Fox of Ace of Cakes fame, who was recently endorsed by Daisy Rock Guitars.

Who knows? Maybe that’s just the next rung on the ladder of fame. Bottom line, come out and see them tonight and in ten years’ time you can say “Oh yeah, I was into them way back when…”