It’s Friday Baltimore. Ease up a little. You’ve been busting ass and running yourself ragged all week… don’t think we haven’t noticed. So tonight it’s all about taking it easy. Slow and Low, that’s the word today.

And we’re in luck again, cause after you hit that post-work happy hour and nosh on something spring-timey and delicious, there’s really no better way to decompress that with Baltimore’s own Secret Mountains, playing at the Hexagon tonight. 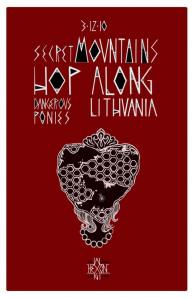 Aural States says that SM’s Kaddish EP is “nothing short of breathtaking.” We say that quiet is the new hard, and these guys sound like Mazzy Star. Don’t get us wrong though: what we mean to say is that they are as good as Mazzy Star. In our book, that’s no faint praise.

They’re supported on this bill by Philly’s Hop Along, which you may also know as Hop Along Queen Ansleis. They’ve played Baltimore plenty before, but we haven’t heard much from them recently. If you haven’t checked them out yet, you really should. Rounding out the bill is Dangerous Ponies and Lithuania.

The show tonight is BYOB, so we’ll probably strap on our trusty steel flask, which we get a lot more use out of than we thought we would when we bought it. We’re also planning to stop by the Windup Space beforehand and have a few cocktails while we check out their visual exhibit, Coupling: Selections from the Baker Artist Awards, which just opened on Wednesday.

Our walls in the new house are still entirely bare, and now that Value City finally got around to delivering the new bedroom furniture (half-assed customer service, to be sure, but the room is strictly big-pimpin’), we have an idea of exactly what we’ll need for that room, canvas-wise. If the work is up to snuff, we might even break out our checkbook.