Sigh. Today the Chop doffs our cap one last time to a Baltimorean we well admire; Brian Dubin. He’s off to Japan as of today. What’s he doing there? Who knows. We’ve been gone, you know, and each year that goes by we fall more and more into the trap of allowing internet interactions to substitute for actual interactions. 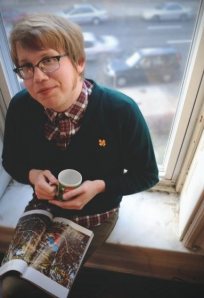 This photo was stolen from Dubin's eHarmony profile.

Dubin himself has been prone to reclusion over the years, spending long periods in which his only signal to the outside world is posting links to rare Nirvana bootlegs to Facebook. When he does come out though, man, does he ever. Dubin has been a part of some of the most crucial Baltimore bands of the last decade, including the Charm City Suicides, the New Flesh, and Fascist Fascist. It’s little remembered that he was even the original drummer for Double Dagger. He’s also been a regular contributor to the Mobtown Shank, filling you in on music you might not have known about otherwise. So his body of work and influence in these parts won’t be soon forgotten.

We also plan to do a bit of finger wagging at his (surprise!) bon voyage party tonight though, since we are firmly on record as being very much opposed to anyone moving away from Charm City for any reason. But we do wish you all the luck and success Dubin, even if we hope secretly that you’ll decide to come back soon.