Words like “craft” and “artisan” are thrown around much too freely these days. Everything we buy now has to have some grand, romantic story attached to it. From furniture to farmers’ markets, from apparel to accessories, stories sell. If you don’t know the name of the guy who made it and you can’t drop by his charming little Gepetto-style workshop on a whim, well, it’s just not worth having, is it? Of course, nowhere is this more true than at your local liquor store.

Let’s face it, wax seals and hand-written barrel numbers are the exact same thing as putting your vodka into a glass skull. It’s selling the bottle, not the spirit. (Although to be fair, there’s a lot of really good whiskies in some of those bottles, whereas all premium vodka is a joke.) In an era when every ultra-premium vodka has a celebrity pitchman, and every distiller in Kentucky is offering single barrel this and small batch that and putting the cute little hand-written batch numbers on the bottle, It can sometimes be hard to tell what’s inside, and whether it warrants its price tag. These days, everyone’s an artisan. 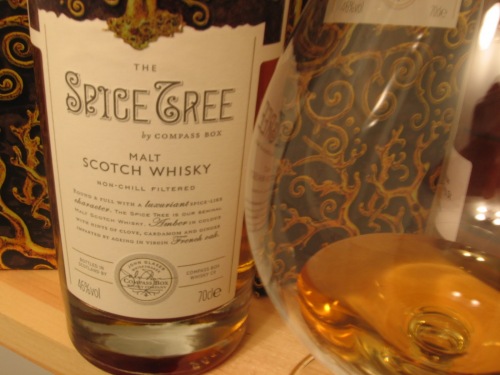 Spice Tree. The best way to warm up this winter.

John Glaser is an artisan. Take that statement for what it’s worth. Compass Box Whisky has a story. We’re not going to bother telling you the story. You can look it up on their site. It’s a lot of technical stuff about wood and blending and aging, which really is interesting if you’re into that sort of thing. What we are going to bother to do is to tell you that this stuff is really, really good.

Of the two lines that Compass Box produces, Signature and Limited Release, we’ve so far had a chance to try three different examples of their whisky. Each one was markedly different, but all were equally excellent. Bottles in the less expensive Signature line are generally available in the $35-$40 range, and compare favorably with bottles costing twice as much. To our palate, a Peat Monster is every bit as good as a Laphroaig, and We’d reach for an Oak Cross over a Glen-Whateveryoulike any day of the week. Seriously.

With Winter now firmly digging in, we’re in all-brown-liquor-all-the-time mode here at the Chophouse. We’re declaring Compass Box to be our house Scotch going forward, and by the time the Winter’s out we expect we’ll have three or four different bottles on hand. We suggest that when you head to the liquor store this weekend you go ahead and buy two or more bottles. They make a great holiday gift, but make sure to keep one for yourself.