If you’ve been following this blog with any sort of regularity, you might already know that we’re definitely not a foodie, but you definitely know that the last thing we’ll recommend doing is watching primetime TV.  In a bizarre twist of fate tonight, that’s exactly what we’re recommending  in one of the most random events we can remember happening… ever. Tonight is the night that the Food Network is set to air the Dangerously Delicious episode of Throwdown with Bobby Flay.

The show will premiere at 9 pm, and Baltimore will be celebrating with a viewing party at South Baltimore’s own Mum’s. Yep. Mum’s. This is going to be sublime in so many ways. 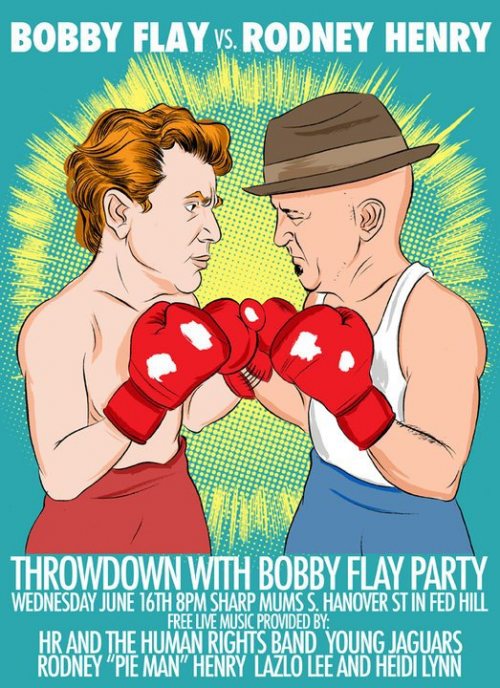 If you know Mum’s at all, you know it’s not the kind of place that lacrosse players, condo-board types and tourists just stumble into on a whim. The show will not be competing with the World Cup or the NBA Finals for screen space. Nope, this is going to be a dedicated crowd, and they’re all going to be giving their full attention to booing, hissing and cursing Bobby Flay. And why not? It seems to us that there could be no more stark contrast in the culinary world than Flay and Rodney Henry. One is one of Baltimore’s prominent small businessmen who literally invented what he’s made from nothing. The passion and dedication that Henry has poured into his shop comes through in each bite, and he certainly deserves every bit of success he’s found. He can also rock a hat better than just about anyone in Baltimore. The other is a grating prettyboy with a rich-kid attitude who revels in his own celebrity and is the antithesis of everything Baltimore is about.

The Chop loves us some quiche, and broccoli mushroom cheddar quiche alll-most made our list of the top five late-night drunkfoods. We’re hoping the that the Dangerously Delicious crew will bring along a few varieties to go with Mum’s cheap drinks.

One thing we know the Pie Man will bring along is his guitar. In addition to the throwdown, tonight is one of the more unconventional bills you’ll find in the Baltimore music scene. We haven’t actually seen Rodney Henry play since his days in the Glenmont Popes, and the last time we saw the Popes was right around the same time we got a driver’s license. So yeah, it’s been a while.

He’s also got H.R.’s Human Rights Band to agree to play. They don’t make too many appearances, so the chance to check them out at Mum’s is worth noting. There’s been a lot of talk on Baltimore streets about H.R. since that citypaper article came out a couple years ago. The Chop has heard plenty of gossip and rumors that we will not repeat here. We’re going to go see the man for ourselves.

The bill is going to be rounded out by the duo of Lazlo Lee and Heidi Lynn and Baltimore’s Link Wray influenced garage-a-billy Young Jaguars.

Come on Baltimore. It’s time to put your fork where your mouth is.

Mum’s is at 1132 S. Hanover St. in Federal Hill. Doors at 8. Throwdown airs at 9, and will be re-run at midnight if you’re watching at home.