Well, isn’t this something. It’s already Earth Day and we still haven’t figured out what we’re doing tonight. There are two shows on the Chop’s radar this evening, and unlike we sometimes do we can’t try being in two places at once tonight. It’s a tough call. We’ll give you the facts and let you sort it out. 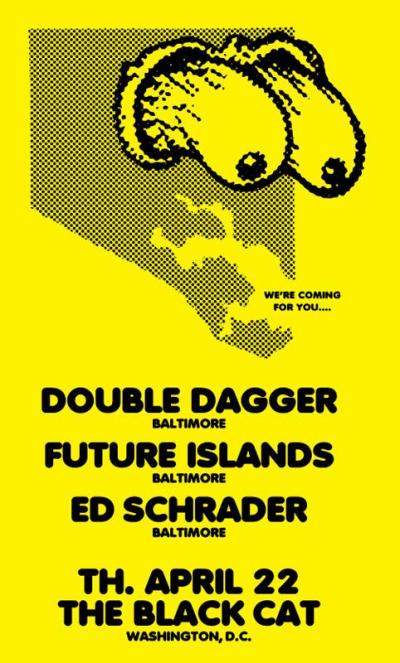 Baltimore is taking over DC tonight when Double Dagger invades the Black Cat back stage with Ed Schrader and the superheated Future Islands who are so hot right now you’d think they were the next Joy Division or something. Seriously, they’ve been setting the internet on fire with that Tin Man Video and when In Evening Air comes out on May 4th it’s going to sell about a million copies and they’ll probably end up on Saturday Night Live. (And remember, you heard that prediction here first. SNL. For real.)

This is clearly a great show, and one of the last opportunities to see both these bands before they both undertake a long touring schedule and get rich and world famous and snort caviar off of Suicide Girls. It’s also a very good chance to go down and thumb our nose at DC a little and remind them that we really are cooler than they are at the end of the day.

There are two very compelling reasons to skip it though, cause who wants to drive to DC anyway? Also: We’re planning on seeing both of these bands at Floristree next week.

Our other, equally enticing option for tonight is to keep it local and low-key and check out the Earth Day show at the Windup Space headlined by Secret Mountains. We’ve blogged about SM before, and they’re another Baltimore band that we basically cannot get tired of listening to or seeing live.

They’re supported by fellow locals Soft Cat, who seem to have an awful lot of members for such a pared down sound; New Jersey’s European Swans, who sound pretty good, but who’d definitely fit in over at LATFH, and Shaun David Gould.

Like we said, we’re torn. So in an unprecedented and exclusive first ever world premiere, we’re going to let you, the Reader, decide which show we check out tonight. Don’t steer us wrong.